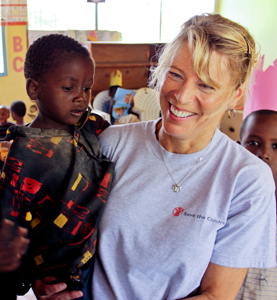 Carolyn Miles, who heads up Save the Children, presents Our Best Bet: How Investing in Children Can Change the World on Tuesday, October 8, 2013 at 8:00 pm in the Diana Chapman Walsh Alumnae Hall Auditorium at Wellesley College, 106 Central Street, Wellesley, Mass. The lecture is free and open to the public.

Miles is the invited speaker for the 2013 Wilson Lecture. The lecture, which is sponsored by the College’s Office of the President, is considered the College’s premier intellectual event. The Wilson Lecture is named for Caroline Ann Wilson, Wellesley College Class of 1910, an alumna who wrote for the Chicago Tribune and who was one of only a few female journalists to cover World War I from the battlefield.

Miles’ visit to campus coincides with the 100th Anniversary of the Wellesley College Child Study Center. There will be additional opportunities to celebrate this milestone anniversary with events and lectures throughout the 2013-2014 academic year.