Every time I’ve passed by the Sprague Clock Tower at Elm Park in Wellesley Hills in recent years I’ve wondered: What’s it look like inside? I finally got around to asking permission to take a peek and was pleasantly surprised to have my wish granted.

Plenty has been written over the years about the history of the four-sided clock tower and surrounding park, which have been kept beautiful  through cooperation between the town and the Hills Garden Club. The tower and park are even on the National Register of Historic Places.

As for the history, the park was once home to the Elm Park Hotel, but the town bought the land in the early 1900s and tore down the old hotel to create a park. In 1928, despite the looming Great Depression, Town Meeting approved funding creation of a clock tower to house the clock and bell that had been at the old Shaw School at Forest and Washington streets, where town meetings were once held. The 65-foot-high tower was designed by park commissioner Benjamin, Proctor, Jr., and granite fieldstones to build it were provided by real estate developer and banker Isaac Sprague V, a mover and shaker in town who among other things was the first president of the Wellesley Historical Society.

The clock tower, which sits at the intersection of Rtes. 16 and 9, has since become a signature sight in town. It’s a favorite among artists and a common image on items such as calendars and brochures. You can read more about the history of the tower on the plaques that surround it and which are included in the slideshow below as well as in these articles from WellesleyWeston Magazine and the town website). But here’s the deal with the inside of the tower: 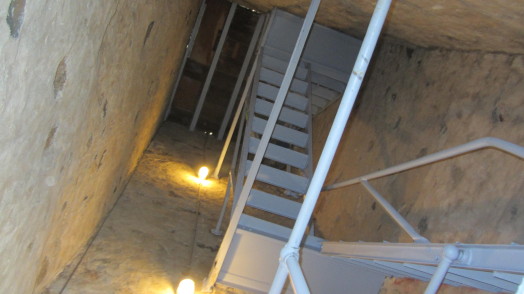 I met in late August with the DPW’s Mike Pakstis and Mike Quinn, the latter of whom had the keys to open the door and who you can see climbing inside the tower in the photo below. Once inside, it wasn’t  as dark as I’d suspected it could be (I brought a headlamp just in case). Mike Quinn flicked on the lights and we ascended 4 flights of pretty freshly painted gray metal stairs. 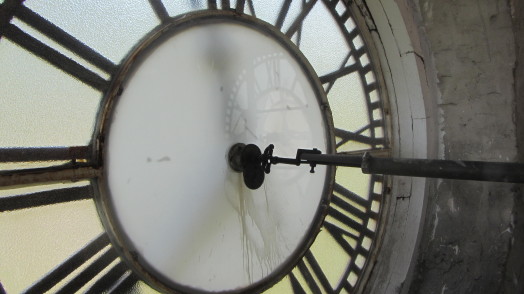 That brought us to the clock room, which in the middle features a 5-year-old-or-so electronic system for keeping the hands going and even newfangled technology for setting the clock ahead in the spring and back in the fall. That technology saves DPW personnel from having to go inside the clock tower often, aside from when they need to change the fat bulbs illuminating the clock. 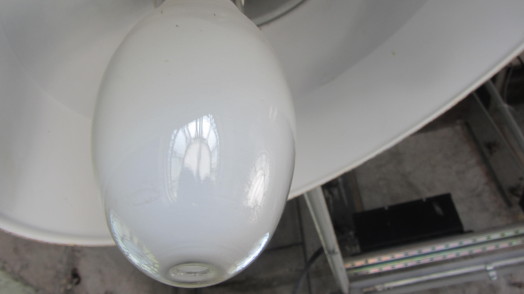 That clock room feels relatively big, as the 3 of us could have invited several more people in there (though it was hot…not a lot of ventilation in there, which on the bright side keeps critters from sneaking in). 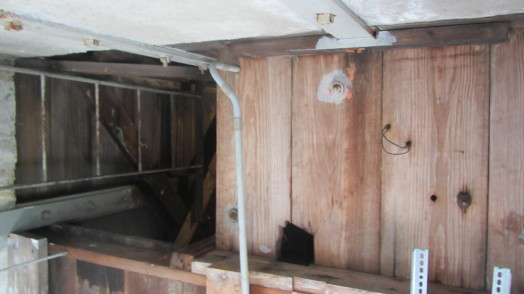 Two more straight-up metal ladders led into what felt like a wooden attic and finally to a wooden door that I had to shift over my head in order to get through. That opened into the fresh air of the cupola, which contains the bell, which wasn’t working when I visited. I was so close to the bell it was hard to take photos of its entirety, but I did get a great view of Wellesley Hills. I’ve included a video below of what that looks like (here are links to the video of the inside and the view from the top as well). 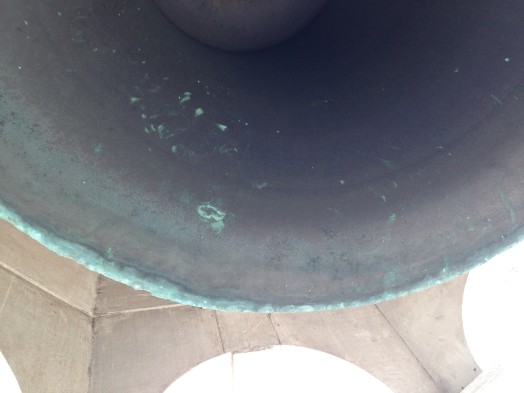 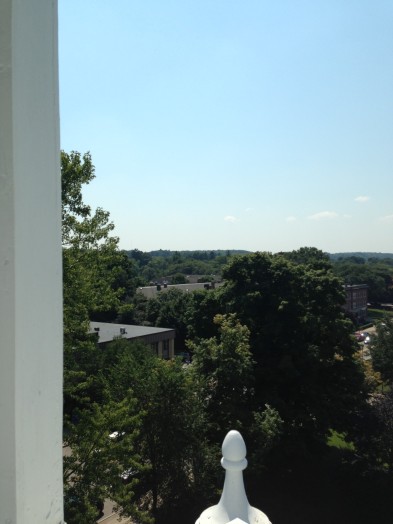 Mike Pakstis joked that it might be nice to rent out the top room for Boston Marathon viewing, though it’s a tight fit designed really for just one person at a time. Though I suppose your typical marathon runner would fit in there just fine.