Max Sours, a member of Boy Scout Troop 185 in Wellesley angling to become an Eagle Scout, has helped steer to completion a new Zen Garden at First Parish of Watertown.

Sours joined forces with about 30 church youth group and troop members to create the garden, which will serve as a reflective space where the  youth group can gather.

The process of creating the garden began almost two years ago, with middle school students studying world religions, including Buddhism. The studies inspired a student named Seneca Hart to set in motion a plan that included making miniature zen gardens in aluminum trays with colored sand, and a visit to the Museum of Fine Arts  to see a life-sized Zen Garden.

While numerous youth participated in the project, which involved fundraising and materials collection, Sours’ contributions included tracking down suppliers who donated gravel/pea stone as well as granite for edging the 10×15-foot space. The young men and women worked diligently in mid-September to shovel out and fill in the garden plot. A tree company contributed a bench and a family is donating a Buddha statue. A dedication was held Sept. 29 to celebrate the garden’s arrival. 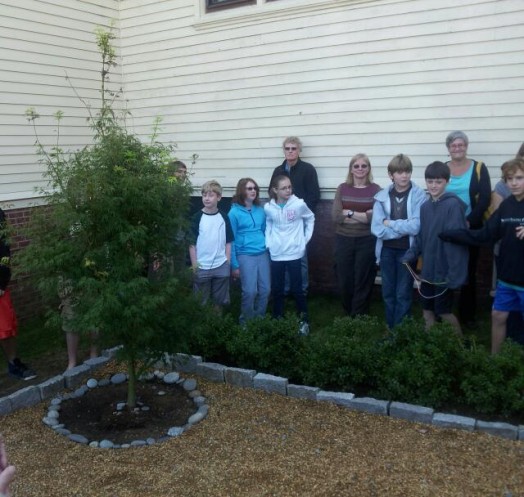