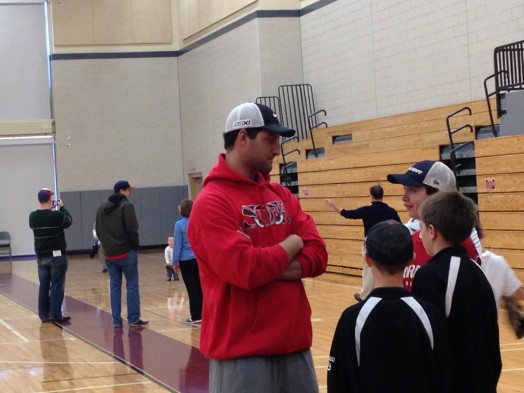 Wellesley High School and Duke University grad Nate Freiman,  who broke into Major League Baseball this year with the Oakland A’s, visited Wellesley High on Sunday to sign autographs and chat with locals about his experiences. Dozens of kids and grown-ups came to welcome back Freiman, whose wife Amanda Blumenherst (a pro golfer) was also on hand.

Freiman, who at 6-feet, 8-inches tall towered over everyone else in the WHS gym, said he learned that he made the A’s when his manager mentioned it off-handedly when passing him in the field. “Don’t tweet about it yet,” the manager said.

Freiman was an excellent catcher while growing up, but turned to pitching once his height made it tough to crouch. But he blew out his pitching arm during his first college start and then switched to first base, where he plays now. He said that upon making the majors he was determined to swing at the first pitch his first time up, something other minor leaguers agreed was the thing to do. Freiman followed off the pitch, but then got a single that knocked in a run.

He said facing Boston’s Jon Lester and Pittsburgh’s Francisco Liriano were among his toughest challenges at the plate this season.

Directing comments to the kids in the crowd, Freiman emphasized how proud he was to have represented Wellesley as a player (though was sheepish about his indoor track exploits at WHS) and how he is in the minority among major leaguers in having a college degree.

The event also featured a slideshow featuring highlights of Freiman’s career, and an appearance by the Red Sox World Series trophy (we had to bail before it was trotted out).