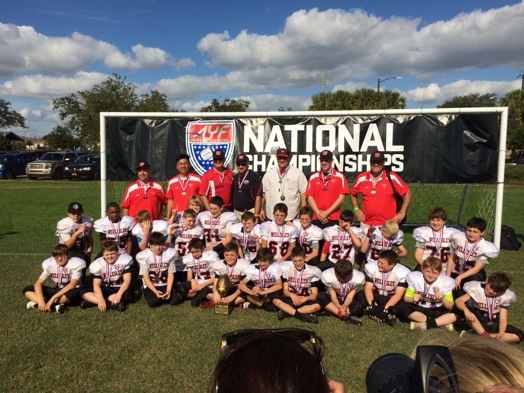 Congrats to the Wellesley 5th grade Jr. Raiders team, which won 20-7 on Friday morning vs. the Cubs from Detroit West Side to capture the national title at the American Youth Football tourney in Kissimmee, Fla. The 24-member Raider team led by what would be the final score at halftime and hung on under a sunny sky and despite an 87-degree temperature.

Earlier in the week, the Raiders knocked off another team from Michigan, as well as one from Florida.

According to one parent, the team hasn’t lost in 4 years over a span of 37 games. Seven coaches and a number of parents joined the boys for the week.

It’s been an especially busy fall on the football fields for the Fadule family, with Jim coaching the national champs (including son Joseph) and QB son John leading the Wellesley High Raiders to a good season.