The Town of Wellesley’s  American flags were flying at half-staff  today in recognition of Nelson Mandela’s death. The 95 year-old, who died Thursday night, was a key figure in South Africa’s fight against apartheid, as well as a corecipient of the 1993 Nobel Peace Prize. His political work against apartheid in the 1950s and 60s made him a regular visitor in prison cells for short stints.  In 1963, however, a sabotage conviction carried a sentence of life in prison.  Mandela was released in 1990 after serving 27 years of his sentence.  He went on to serve as president of South Africa from 1994 – 1999.  He spent his later years as a United Nations Educational, Scientific, and Cultural Organization Ambassador and an outspoken campaigner against HIV/AIDS. When he left the public eye in 2004 he told reporters, “Don’t call me, I’ll call you.” 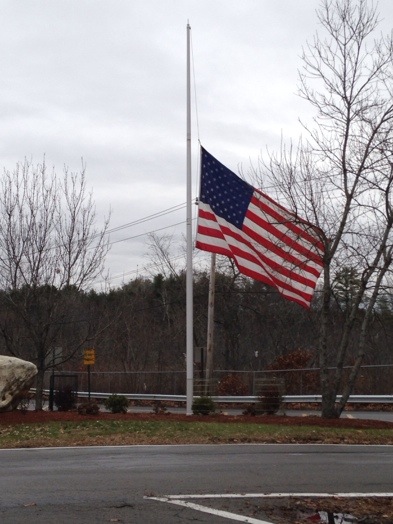