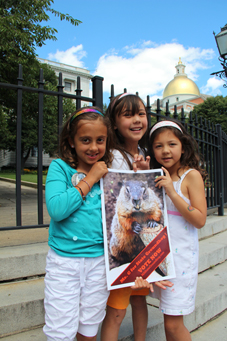 Hunnewell Elementary students in Wellesley are getting a lesson about animals, weather and politics all wrapped into one as they campaign to elect Ms. G, a 12-year-old groundhog at Mass Audubon’s Drumlin Farm Wildlife Sanctuary in Lincoln, to the post of State Groundhog.

The kids will have a chance this Wednesday  at 1pm to make their case at Wellesley Free Library before a joint committee from the State House, which is considering a bill regarding Ms. G written by State Rep. Alice Peisch. Students will arrive at the library at noon to make posters and buttons, and to fortify themselves with pizza, before they testify.

The campaign, which got its start about a year ago, is being spearheaded by Mish Michaels, a Hunnewell mom and former TV meteorologist who met Ms. G on the job, and Michaels’ daughter, a Hunnewell student.

If you smell a book deal in the works, that’s because there is one planned. Ms. G, a veteran of the Groundhog Day weather prediction game since 2008, will  be the subject of a book being written by Michaels and her daughter, and is expected to be published next year in February. According to the Ms. G website, the critter has proven to be more accurate with her forecasts for this region than has Punxsutawney Phil himself. When not predicting weather, Ms. G travels to schools, scout groups and such to educate people about animals.

You can vote for Ms. G here, and apparently don’t need to be of voting age to do so. Ms. G appears to be running unopposed for the post, barring a last-minute entrant.