When I used to work for the Boston Herald, many of my colleagues badmouthed the Boring Broadsheet while also having their resumes filed in triplicate over on Morrissey Boulevard, ready to hop on over there on a moment’s notice.

Having grown up in the Boston area, I too envisioned a job at the Globe one day. Though happily ensconced in my job, writing for the Globe and Globe Magazine on a freelance basis over the years has satisfied that itch.

But it’s still always amusing to see that Mrs. Swellesley and I do in fact virtually work for the Globe these days, not that we have any issue with them aggregating our stuff as long as they link to us and give proper credit, as we do when we cite their content. As you might recall, they don’t snag stories from the Townsman and its sister publications anymore after parent company Gatehouse lawyered up a few years back to prevent the Globe from doing scraping content. 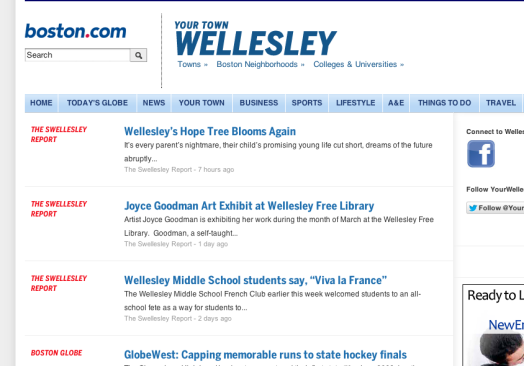 Maybe the Boston Globe should just get it over with & add our names to its masthead (The Swellesley Report) http://t.co/pVDqVqKCwz

Also see: You’re not special, but my blog is