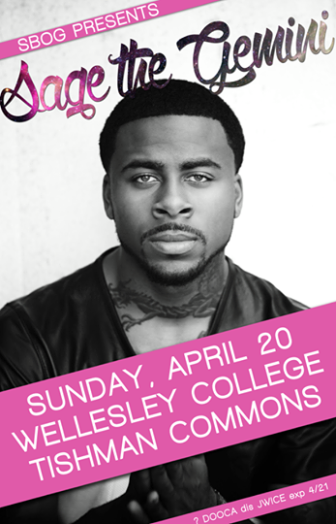 Wellesley College is frequently out in front of the music scene when it invites singers and bands to campus for its Spring Week festivities in April, and this year looks to be no different. The school’s pre-Marathon Monday concert on April 20 will feature Sage the Gemini, an up-and-coming rapper out of California’s HBK Gang who already has a couple of hits in “Gas Pedal” and “Red Nose” that have grabbed tens of millions of views on YouTube. His debut album, Remember Me, is set to be released this month.

Warning that his lyrics might be as threatening to some on campus as a certain sleepwalking statue.

It’s unclear at this point when tickets will go on sale, how much they will cost and whether people from off-campus will be eligible to attend. In the past, the college has offered limited tickets to outsiders, though sometimes with restrictions such as being the guest of a student.