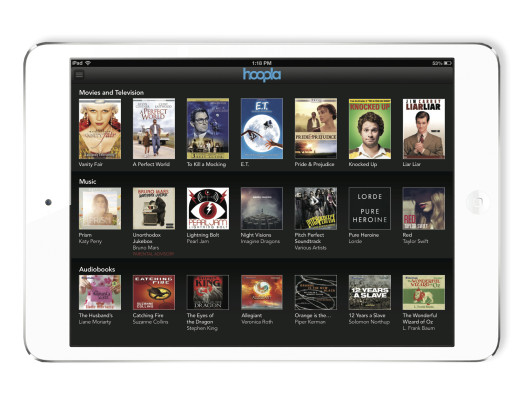 Wellesley Free Library patrons equipped with computers or mobile devices now have free access to thousands of additional movies, TV shows and audiobooks thanks to a partnership between the library and a content service provider called Hoopla Digital.

The on-demand movie and TV content collection initially available probably won’t blow you away in terms of recognizable new titles (a few might trick you into thinking you’re able to grab The Lego Movie or 12 Years a Slave…but not quite). But there should be something for everyone, including Hollywood movies, documentaries, children’s content and classic TV shows and movies. You can also grab music albums, including the latest from performers such as Beck, Katy Perry, Lorde and Imagine Dragons. Hoopla has partnerships with outfits such as Universal Pictures, MGM, National Geographic and BBC Worldwide.

You can access the service via your computer as well as via Apple iOS or Android mobile devices, including tablets and smartphones.

I decided to give the streaming service a whirl, first via a Mac, and it was easy to sign up. I did have to download an add-on module called Widevine to get the video to show up, but overall, it probably took me less than 10 minutes to get up and running with a video. You can borrow up to 5 titles per month, and they are returned automatically, so you won’t get hit with late fees. The lending periods are different for each type of material: 3 days or 72 hours for movies, 1 week for music, 3 weeks for audiobooks.

Now not that I hadn’t already seen all the Academy Award nominations for Best Foreign Language Film, but I decided to first download “The Great Beauty” since that was the big winner on Sunday night. You know, just so I’d be able to quote it when I go out with the guys after playing hoop. The video  started up right away when I clicked on it on my desktop. I then downloaded the free app on my iPhone and sure enough, it worked and I was able to pick up with the movie where I left off on my desktop.

The Hoopla Digital service adds to the library’s growing portfolio of digital services, including downloadable books for devices such as Kindles.

The Hoopla service is now available at 9 Massachusetts public libraries, including in Chelmsford and Watertown. Hoopla says participating libraries only pay for what patrons use. Wellesley Free Library says each participating library sets its own limits for patron usage, so will see how it goes with 5 per month and adjust accordingly depending on how much it winds up costing