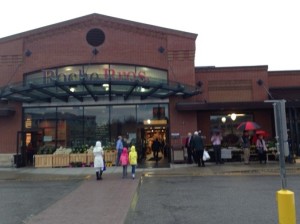 A  group of Wellesley Town Meeting members, including the always politically active Roy Switzler, is pushing to get enough signatures on a petition by Tuesday that would put a referendum on the May townwide ballot regarding the town’s purchase of the property at 494 Washington St., next to the proposed senior center site adjacent to St. Paul Church. Petition backers argue that the town is paying way too much for the property at $1.365 million, which Switzler says is between 30% and 40% above the appraised value, depending on which assessment you believe.

[The appraisal numbers referenced by Switzler at Town Meeting were questioned by some, including attorney David Himmelberger, who later sent a letter to Town Meeting members expressing his concerns. In particular, he took exception to Switzler’s accusation that “the assessment for the property had been ‘artificially increased’ in order to make the purchase price of 494 Washington Street more palatable.”]

A handful of petition backers were in front of Roche Bros., on Thursday and Friday  hitting up shoppers for their signatures. They need 5% of town’s registered voters to sign and had at least a third of that by Friday afternoon, according to the town. We received emails on Friday from one person and about another who signed the petition, but were upset because they felt what they were signing wasn’t well enough explained, in hindsight (there also seemed to be some confusion by the voters over whether the signatures were for a referendum about 494 Washington St., or regarding the proposed Prop 2.5 override). They were told that signing was just to get the referendum on the ballot, but they feared that doing so might have actually amounted to voting in favor of the referendum and might delay the process of the town purchasing the property even if the referendum fails. They contacted the town to see how they could undo their signatures.

Those pushing for a referendum did go through the town to draft it. The document reads as follows:

Shall the town vote to approve the action of the representative Special Town Meeting of April 8, 2014 taken on April 8, 2014 whereby it was voted to appropriate $1,365,000 for the purchase of 494 Washington Street by the Town; and authorize the Treasurer with the approval of the Board of Selectmen to borrow said sum; and authorize the Board of Selectmen to take all necessary action to complete said purchase. (Article 2, Motion 1)”

Switzler says if enough people sign the petition for the referendum by Tuesday then the it will appear on the same ballot as the question about the $3.345 million override in May.

“Our concern is that the Town’s assessment of the property is set at $981,000.00, some 40% below the selling price and it is 30% above on a separate appraisal on the property done for the Town, that came in at $1,050,000.00,” he says. “We think the premium of a selling price at $1,365,000.00 is much too high above the assessment of $981,000.00 and further note that there has been an approximate 29% increase in that assessment on this property in the last 4 years, which seems to be far above other assessment increases during the same time period around Washington Street and in town.”

The Townsman reports that selectman Don McCauley says the deal, even if the senior center proposal fizzles out, is still “a great opportunity for the town” in that it represents about an acre of property right in the middle of town when combined with the former American Legion land owned by the town.

If the referendum does get on the ballot, the Town Meeting decision on the 484 Washington St., sale will only be blocked if at least 20% of registered voters vote No and if those voters are in the majority on that question.

If you’re having deja vu about all this, that’s probably because the town almost bought the property back in 2010 for $1 million and a referendum to nix the deal was set to go to a vote, but the seller backed out before that happened.