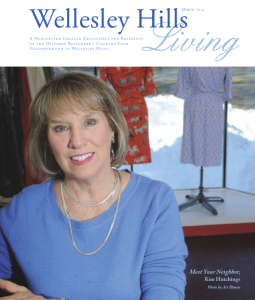 A new monthly print magazine called Wellesley Hills Living popped up earlier this year, but don’t be surprised if it never showed up at your house: It exclusively goes to about 500 homes in the “historic Belvedere/Country Club Neighborhood in Wellesley Hills.”

The free color and black-and-white magazine is a product of N2 Publishing, a fast-growing North Carolina company that hires people across the country to start up hyperlocal publications filled with ads from local businesses and content generated largely by neighbors. That content, spread across 24 to 30-or-so pages per issue so far in Wellesley Hills Living, runs the gamut from photos of gardens to home renovations to business profiles. A couple of local students wrote about their trips overseas.

N2’s Wellesley area director is named Barbara Jacobs, and she neither lives in Wellesley nor has an extensive publishing background (though she has blogged and her husband has experience in book publishing). Rather, Jacobs has been in the color consulting and design business for years. Her husband learned about N2 Publishing while at a conference in California and he suggested to his wife that she take a look at the business. She did, and over the past year or so she has started up Wellesley Hills Living, which is about to deliver its fourth issue.

Jacobs’ job involves soliciting business partners, such as those that will advertise, as well as getting to know people in the Wellesley Hills neighborhood her publication serves. “Residents generate 98% of the content,” she says. “They like contributing, it’s a way to reach out to neighbors.” (UPDATE: 2016 — new contact is: Jayne Overturf at jayne.overturf@n2pub.com)

Jacobs is protective of her publication, which technically is referred to as a newsletter on its cover. In an effort to safeguard the privacy of those who do allow their stories to be told and photos to be shown in the magazine, she only shows me a glimpse of a couple of issues. The cover shown here features Kim Hutchings from the Elan consignment shop in Wellesley Hills.

N2 Publishing has other such magazines in local communities such as Westborough and Hingham, and new ones are coming to neighborhoods in Weston, Chestnut Hill and more.

Some say print is dead, but you’d never know it in Wellesley. The Townsman soldiers own, WellesleyWeston Magazine seems to keep putting on weight and earlier this year, Hometown Weekly started arriving in residents’ mailboxes. Maybe we’ll have to issue The Swellesley Report in print. I’m thinking April 1.