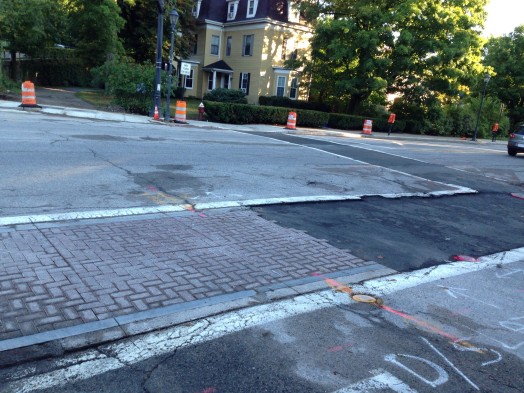 Wellesley has begun doing away with its brick crosswalks as well as bricks inlaid on sidewalks and around trees. The town is paving over the crosswalks and replacing the sidewalk bricks with cement or dirt. Work has been taking place during the day and for the crosswalks, at night.

While the bricks do add a classy touch, many of them have started to come loose and disintegrate (and some of the issues might involve a layer under the bricks that wouldn’t necessarily be obvious just looking at the crosswalks). Uneven bricks obviously can cause problems for pedestrians, drivers and cyclists.

We understand that the town has secured (state?) funding to do the project and has communicated with businesses to redesign sidewalks and tree plantings. The Public Works department has also issued noticed in recent weeks about the construction.

It does appear that select crosswalks might remain — a bunch still exist, for example, in Lower Falls even after work on Rte. 16 there.

We’ve sent an inquiry to the town to get more details. A reader wrote asking why the town is getting rid of brick crosswalks that seemingly are in good condition. We also wonder how long ago and how much the town invested in its brick and granite crosswalks, and what will become of the bricks that are removed. We’re also curious about what the replacement crosswalks will look like. 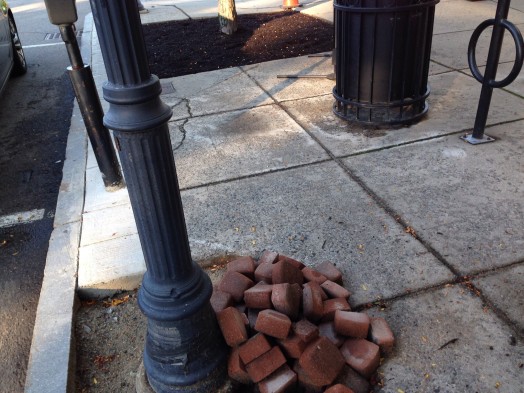 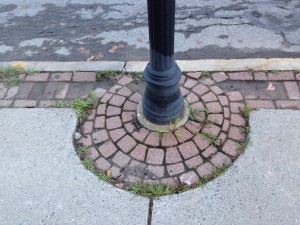