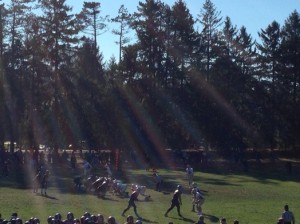 The Boston Globe has named Wellesley High School as the Division 2 winner of its Globe Scholastic Awards for the 2013-2014 sports season. While this might sound like an academic honor, it’s actually a sports thing.

According to the Globe:

Wellesley won 69.50 percent of its games and earned its first Globe Scholastic Award, taking Ames Division 2. The award was one of 10 the Globe presented in the 42d year of its Scholastic Awards.

The awards rank schools based on their win-loss percentage for regular-season play. Game scores are compiled and updated daily during the season. Complete results are available online.