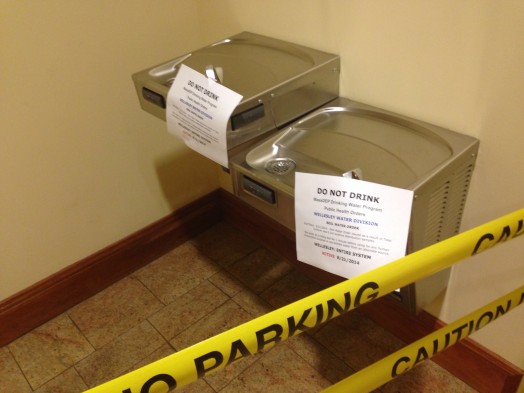 Wellesley Police Chief Terry Cunningham, Town Executive Director Hans Larsen, Director of Public Health Lenny Izzo and the DPW’s Mike Pakstis gave us a call to answer some of the questions Swellesley readers have been asking today about the water warning that followed discovery of a positive E. coli test at a town reservoir. I’ve boiled down their responses about the water warning here:

Why did the reverse 911 call about the water warning take until mid-afternoon given that the E. coli discovery was made during the morning?

Once a test comes back positive for E. coli the Massachusetts Department of Environmental Protection is the one that sends the official notice and you have to go into a boil water mode. It wasn’t until 11:22am that we got an unofficial notification from the DEP, but in the meanwhile, they had already posted to their website. Even after that, it took a while for us to figure out what to say (it’s easy for us to get the word out via the CityWatch phone notification system, but we first wanted to get detailed information on the town website [and an updated one] that we could point people to…not having something there would be frustrating for them). Once we got the CityWatch message up and got the information on the town website, we pushed it out as quickly as we could. The police issued notices via Twitter, notified Babson so that it could do its emergency reach-out and alerted others. Officially, the town had 24 hours to get the notice out, not that it was going to wait that long. It’s not like this is a life-or-death situation: It’s highly unlikely that anybody would get sick from it, but just to be on the safe side we wanted to issue the boil water alert. [Editor’s note: Residents on social media sites, including our Facebook page, were giving town officials heat because they were learning about the water issue earlier in the day from local media and from local restaurants, which had begun to post signs and even remove water from tables, and some didn’t get reverse 911 calls until late in the afternoon.]

Do you recall the town ever having to issue such a notification before?

For Morses Pond swimming, yes, but not for drinking water testing positive for E. coli. Some years ago there was something with a total coliform bacteria finding. It doesn’t happen often.

Has a certain strain of E. coli been identified in the water?

That was not specified.

How often do the town’s reservoirs get tested?

They test for bacteria 36 times per month, so it’s not like this could have happened 5 months ago and they just ran across it. While the positive E. coli test resulted from one well, the town doesn’t want residents/businesses to assume just because they’re on the other side of town that they should ignore the water boiling warning. The town just doesn’t know that yet.

More on Wellesley water from the town’s water and sewer department.