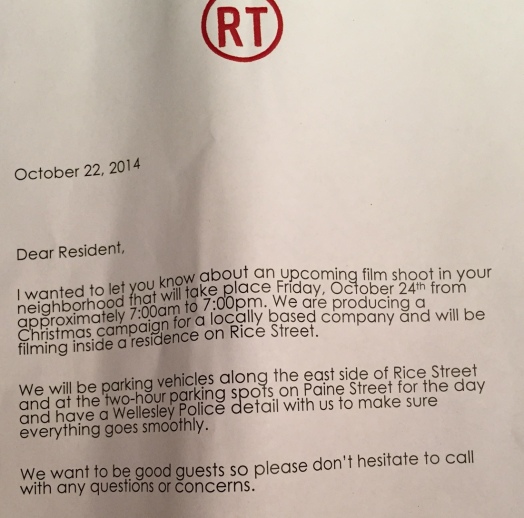 Another production company is honing in on Rice Street in Wellesley for a film shoot (sounds like some sort of Christmas-related commercial).  It will take place on Friday, Oct. 24 from 7am-7pm, and is being orchestrated by Redtree Productions, whose directors include Wellesley’s own Mary Mazzio.

A scene from a movie called “The Grey Lady” was to have been shot on Rice Street earlier this fall, but the shoot was cancelled.

Wellesley has been a filming hotspot of late.

A movie called “The Greens are Gone” filmed in Wellesley in July at the entrance to Elm Bank Reservation.

Wellesley has been the location of movie-making in the past, including for The Company Men and Mona Lisa Smile. Ghosts of Girlfriends Past was also filmed in part at Elm Bank.