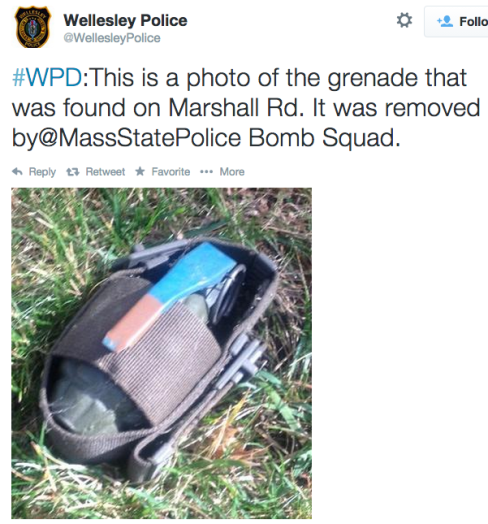 The Wellesley Police and Fire Departments responded to a home on Marshall Road — in a neighborhood near Morses Pond where many streets are named after military generals — this morning for a report of a grenade that had been found.  Construction crews working inside a single-family home found a military hand grenade while removing a wall.

Wellesley Police checked area residences and sealed off a small area as a precaution.  The Massachusetts State Police Bomb Squad responded to the scene and determined that the grenade, which appeared to be an old training unit, was not live.

The State Police removed the device and the scene is now clear.

Last year an inert grenade was found on Falmouth Road. And a couple of years before that, an inert World War II shell was discovered in a Wellesley yard by some kids.

(Aerial shot below, before grenade was determined to be inert.)

#skyfox in #Wellesley where hand grenade found inside a wall by contractors. Unknown if its Live or inert. #fox25 pic.twitter.com/AYI3nSwihW