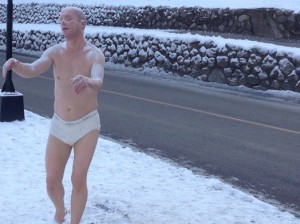 I’m really not quite sure how to describe this project from artdesigncafe.com, other than to say it combines media coverage of the Wellesley College/Tony Matelli “Sleepwalker” sculpture and music.

Who knows, maybe it will wind up in the Wellesley College Davis Museum.

Reflecting on the Sleepwalker media frenzy at Wellesley College earlier this year, artist Tony Matelli who created the discussion-generating sculpture said in interview,

“I think it’s bizarre. The attention it received was so out of left field, so irrelevant to the work. So, I’m mystified by it really. It was fascinating just to watch it happen.” (31 March 2014, artdesigncafe)

This sentiment sparked an independent initiative to compile a sizeable sample of the media coverage at artdesigncafe.com . After gathering 5000+ articles in 96+ countries, this initiative ended in August, still incomplete. In artdesigncafe fashion, then it was time to examine and interpret the research findings combining selected text, visuals and sound, resulting in Sleepwalker media coverage: The remixes. Previous independent remixes and media coverage compilations have focused on artists Tracey Emin, Damien Hirst, Paul McCarthy, Gregor Schneider, and Spencer Tunick.

To see the overview of the five media coverage remixes and the article listing of the overall project, including an overview article partnered with Sculpture magazine, and interviews of Tony Matelli and the exhibition’s media consultant Nina Berger, click: http://www.artdesigncafe.com/sleepwalker