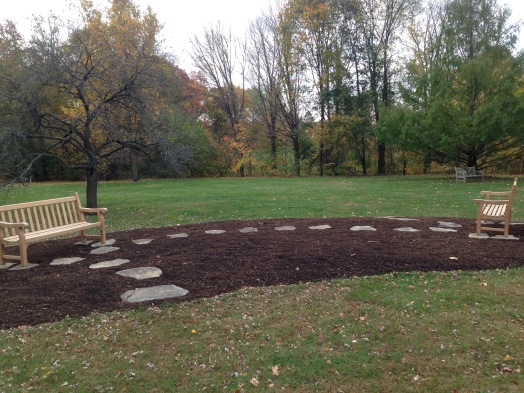 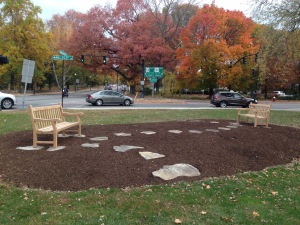 The town of Wellesley for years has worked to beautify the traffic island at the busy intersection of Washington Street, Wellesley Avenue and Brook Street. But try as the DPW Park & Tree Division might, the flowers and plantings usually wound up getting run over by vehicles. “The last straw came two years ago when the planting of annual flowers was flattened by a large truck wiping out two-thirds of the island,” says Cricket Vlass, landscape planner for the town (the island’s before-and-after situation is shown at bottom of this post).

The town decided that not only was this costly, but also that it was dangerous for town employees weeding and watering there. But Wellesley hasn’t given up on its notion to make that highly trafficked section of town prettier, and the new plan is to create a garden in Simons Park, that swath of green space between the intersection and the Wellesley Free Library’s main branch. This is the same park that back in the early 2000s almost got a bandstand and that more recently has been used for activities such as Art in the Park on Wellesley’s Wonderful Weekend.

The work on Simons Park has already begun. Two new benches and some landscaping, including stepping stones, might have already caught your attention. “In moving forward the Park Division wants to create a garden that would bring back some beauty to the intersection.  Simons Park is the perfect area to create a garden space with benches and stepping stones where visitors can either watch the traffic go by or gaze inward toward the garden and park,” Vlass says. “The plantings will be installed in the spring and will include a combination of natives, edibles and some well-behaved plants from around the world.  The plants have been chosen for their beauty, ruggedness and low maintenance requirements.” As for the island at the intersection, Vlass says the town’s Highway Division will be removing the soil and using recycled concrete bricks from the crosswalks to hard-scape the island.  This will minimize both future maintenance costs and exposure for employees. “We have been fortunate to receive a generous donation to help fund the new garden from the Wellesley Garden Study Group, a garden club that has financially supported our gardening efforts on the traffic island as well as new plantings at the entrance of Town Hall,” Vlass says. 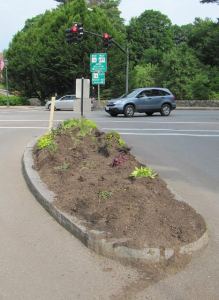 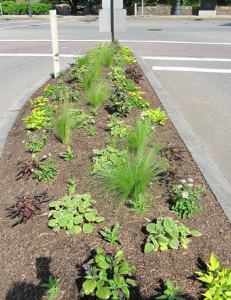