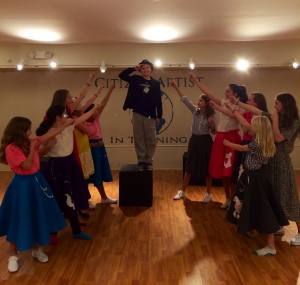 Meredith Wilson’s The Music Man Jr., includes iconic songs such as “Shipoopi,” “Till There Was You,” and “76 Trombones.” The story follows fast-talking traveling salesman Harold Hill as he cons the people of River City, Iowa into buying instruments and uniforms for a boys’ band he vows to organize. The catch? He doesn’t know a trombone from a treble clef. His plans to skip town with the cash are foiled when he falls for Marian, whose belief in Harold’s powers just might help him succeed in the end in spite of himself. Filled with large dance numbers, stylistically re-imagined by WTP, this story is appropriate for all ages.

There are two  casts filled with 60 students between the ages of seven and fifteen who bring to life the bustling town of River City. Cast members of The Music Man, Jr. reside in Wellesley as well as neighboring communities including Newton, Waban, Needham, and Natick.
The Production team includes, Hillary Drew, Director; Tristan Bouchard, Music Director; Hannah Shihdanian, Choreographer; and Set Designer Peter Waldron. The Music Man, Jr. is the fifteenth performance WTP has produced in 29 months.

Wellesley Theatre Project is an arts academy and a Wellesley nonprofit devoted to providing students (PreK – 12th Grade) with the opportunity to study and experience theatre and performing arts.