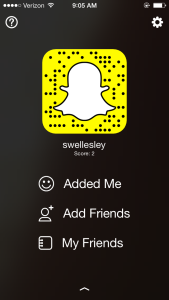 The Swellesley Report has Facebook, Twitter, Pinterest, Instagram, Vine and even Google+ social media accounts, some more active than others. We even dabbled in Yik Yak last year when it became a disruptive force at Wellesley High. Now we also have a Snapchat account under the handle “Swellesley”.

Yeah, the sort-of self-destructing photo sharing app has been hot for a while and really broke through in 2014, so we’re not claiming to be on the cutting edge here. But it hasn’t really been clear until recently that Snapchat might be a thing for publishers to use. Snapchat earlier this month joined forces, via its new Discover program, with a bunch of slightly bigger publishers than us (CNN, National Geographic, Cosmo, etc.) to clutter people’s Snapchat streams with news clips.

We’re not quite sure what we’ll use our Snapchat account for, but we’re open to ideas.