Neither snow nor rain nor heat nor gloom of night stays these couriers from the swift completion of their appointed rounds.

We’ve been peppered with questions in recent days about what’s going on with missing mail in Wellesley in recent days (So frustrating this didn’t happen during election season when the mailers come flooding in!). We’ve had reports from Linden Street, Oak St., and Avon Road, for starters.

The Avon Road resident said they went without mail for 5 days during one recent stretch, then started it up again, then it was discontinued for most of this past week. “Many of us went to the post office and got little to no information… A post office employee delivering mail last night told one neighbor that he was told to only deliver packages, but no mail.” A temporary carrier also said a second delivery might take place one day.

An Oak Street resident said people in her neighborhood also have gone days without mail in recent weeks, with some bundled deliveries here and there. Upon calling the post office, the resident was told the regular carrier was on vacation, leaving her to believe that her mail would go on vacation any time that happened again.  She said she’s always been a USPS supporter, but now will look first to FedEx or UPS for sending packages.

A Wellesley Hills post office worker says USPS attempts to deliver mail within two days after a storm and then it’s held at the post office to be picked up (go to your nearest post office…Wellesley Square is for 02482, Wellesley Hills for 02481, etc.). This is called a “snow hold.” For the walking routes, carriers can’t physically can’t transport multiple days’ worth of mail, so mail is held at the post office, although some carriers will lug around the delayed mail as well.

Also, many USPS mail boxes got buried by plowed snow and had to be dug out, contributing to delays, the postal worker said.  Not to mention, carriers sometimes can’t deliver mail to homes where mailboxes or sidewalks haven’t been shoveled out (one carrier recently suffered a broken wrist after falling in bad conditions). 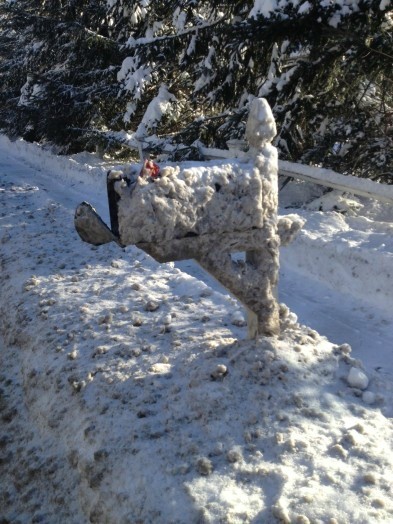