Yes, that’s one small token of appreciation coming the way of the Wellesley Fire Department for its rescue over the weekend of a dog on the Charles River near Elm Bank Reservation.

PETA has once again recognized Wellesley’s firefighters with a Compassionate Fire Department Award, as it did following the department’s rescue of Crosby the dog from the Charles in 2013.

As PETA called the most recent action, the Wellesley Fire Department received “a harrowing call from a bystander who found Cooper, a missing dog, clinging to a patch of branches and ice 40 feet from the shore of the Charles River. The firefighters leapt into action, and in just 20 minutes, Cooper was pulled to safety and reunited with his family.”

“When this frightened dog’s life hung in the balance, these courageous rescuers came through for him,” says PETA Senior Director Colleen O’Brien. “PETA hopes this will inspire others to come to the aid of animals in need.”

PETA says that in addition to sending Wellesley firefighters a framed certificate, it will also pass along  “a box of delicious vegan chocolates, and a copy of The Engine 2 Diet, a Texas firefighter’s 28-day plan for staying in prime firefighting shape by eating a plant-based diet.” 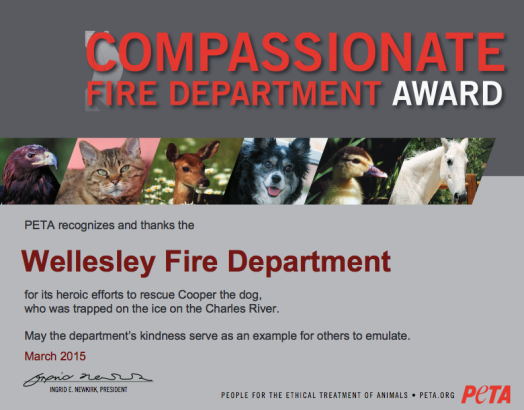