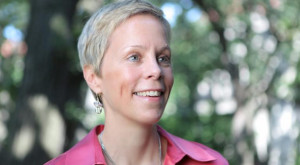 Thomas is among the most accomplished and prominent composers in the world of contemporary concert music, according to Wellesley College. She served as Mead Composer-in-Residence for the Chicago Symphony from 1997 to 2006 and has collaborated with many other European and American orchestras, among them the Berlin Philharmonic, London Symphony Orchestra, and Boston Symphony. She has also worked with many of the great conductors on the current international scene, most notably Pierre Boulez and Daniel Barenboim, but also Christopher Eschenbach, Esa-Pekka Salonen, Marin Alsop, Mstislav Rostropovich, and many others. Thomas taught at the Eastman School of Music and Northwestern University before becoming one of six University Professors at the University of Chicago.

A finalist for the Pulitzer Prize, she has also received numerous honors and award for her work, from the Siemans Foundation in Munich, the American Academy and Institute of Arts and Letters, the Guggenheim Foundation, National Endowment for the Arts, and the Koussevitzky Foundation.

The event takes place at the Jewett Art Center Auditorium at Wellesley College and is free/open to the public.