I have to admit, this email subject line did grab my attention: “Laurel Ave homeowners kill recess for RSM students.”

To translate, RSM stands for the Russian School of Mathematics, which has an office at the corner of Washington Street and Laurel Avenue in Wellesley and services elementary through high school students. To give students a break from the number crunching classes, which can last for a couple of hours, the school lets them out for short recesses at Shaw Common (aka Shaw Park) on Laurel Avenue. 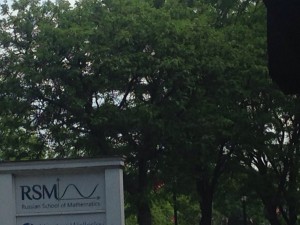 But apparently some neighbors didn’t appreciate the ruckus that they said kids were making, not to mention litter they claimed students left behind.

After receiving complaints about RSM’s park use, the Wellesley Natural Resources Commission (NRC) in November sent a letter to the school notifying the administration of the issue and recommending that the school apply for a permit through the town for regular use of the park, especially if 10 or more people would be using it.

The school did in fact then apply for a permit and it was granted at the end of March, with an emphasis on the need to clean up after each use.  The permit was issued for use of the park for 70 minutes per week, for 10 minutes at a time during certain hours Monday through Thursday, and on Sundays.

The NRC was approached in early May by a Laurel Avenue resident curious about the group’s permit status, at which point it was determined that the permit had expired and was due for renewal, says NRC Director Brandon Schmitt. The NRC was also notified that 25-30 RSM students were using the park at one time and that litter was still an issue. Meanwhile, a new application was sent to the school.

At a May 14 NRC meeting, Laurel Avenue residents met with the director of administration at Wellesley RSM and the RSM CEO. “Prior to the meeting, the office received numerous correspondence about the use of the park, both from residents concerned about the school ‘taking over the park’ and from parents of children at the school wanting access,” Schmitt said.

At that time, a compromise was reached. The NRC approved the school’s use of the park, with a maximum of 12 students at a time, from 4:30-4:40pm Monday-Thursdays, but not on Sundays. While Shaw Common is the most convenient park for RSM students to use, the NRC also suggested other possible parklands for the school to visit.

“There was clearly a communication problem between the residents and the school and between the school administration and its staff as to what the expectation was, but since the NRC has issued a permit, we have not received any complaints,” Schmitt says.

Meanwhile, we hear that the school has taken something of a break from taking its breaks at Shaw Common.