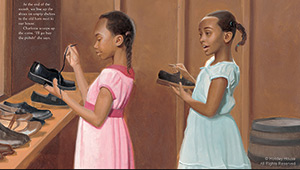 Wellesley College professors are well-versed in the concept of publish or perish and indeed, they are a life-affirming lot, putting out textbooks, novels, academic papers in all disciplines, and more. Generally, we let their writerly accomplishments pass without fanfare, unable to find enough of a Wellesley angle to warrant a post. Although undoubtably worthy works, it’s true that we have ignored both the article on Spinoza’s concept of evil as well as the paper about the rise and fall of plankton.

But when English Professor Susan Lynn Meyer and her picture book New Shoes turned up at Wellesley Books (where autographed copies are available), we took notice of her recently published story, which deals with 1950s segregation and the encouraged “ew” factor that stores of that time period sanctioned against African-Americans, courtesy of Jim Crowe laws. As in ew, I don’t want to try on a dress if a black person has touched it. As in ew, I’m not going to walk a step in those shoes a black person has tried on, let alone a mile.

The 40-page book, published by Holiday House, with accompanying oil-based illustrations by the award-winning Eric Velasquez, tells the story of Ella Mae, a young girl whose much-anticipated shopping errand with her mother turns into a not-so-subtle lesson about where she belongs in the customer pecking order of shops in the pre civil-rights era. Ella Mae is able to shrug off being made to wait behind the white girl even though she was at the shoe store first, but when she finds out about the “look with your eyes, not with your feet” policy of the store toward its black, cash-at-the-ready customers, first she feels knocked down a peg, as institutionalized racism intended. Then Ella Mae gets an idea.

Ella Mae takes her feelings of injustice and channels them into action, opening up her own shoe store, of sorts. She and her cousin collect used shoes from friends and neighbors, spiff them up, and set up their own “shop” with policies of their own making. Think radical notions such as try before you buy, peppered with plenty of may I help you and thank you for shopping, sir/ma’m.

Meyer got going on the idea of writing a picture book with a black protagonist when she was looking for books that featured black characters to read to her daughter’s kindergarten class. Her weekly story time gig there included the days that fell during Black History Month, and Meyer quickly had trouble finding enough to read if she wanted to keep with the theme for the entire month, which she did.

Finding books for one week was easy. Anybody can dig up Courdory by Don Freeman or The Snowy Day by Ezra Jack Keats. But you can’t expect kindergarteners to sustain a multi-week interest in the sartorial problems of a suspenders-wearing bear. And although we all love Peter’s adventures in the snow, he’s been having them since 1962. Just sayin’ is all.

You know if your Jamaican colleague, a senior lecturer in English with a 4-year-old of her own, recommends titles and you still don’t have enough to get you through Black History Month, there’s a dearth. 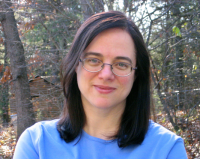 Meyer somehow managed, but the bee was in her bonnet and she decided to write a story that had begun to take root in her mind, joining writers she had long admired, Jacqueline Woodson, author of The Other Side and Mary Ann Rodman, author of My Best Friend, both of whom wrote books with black protagonists. And so, New Shoes was born.

In a fun twist, thanks to the miracle of Facebook, Meyer recently heard from the models for Ella Mae and Ella Mae’s mother. The young lady sent along a picture of herself, all smiles and cool fashion sense. To Meyer, that connection made her feel like her book was truly coming to life.

Meyer is currently on sabbatical from Wellesley College and, despite ice dams pouring down her walls last winter, has finished her second novel, Skating With the Statue of Liberty.  It comes out from Random House in April 2016 and is the companion volume to her debut novel, Black Radishes, which was inspired by her father’s experiences as a Jewish boy in Nazi-occupied France.

Black Radishes won a Sydney Taylor silver medal and was a finalist for the Massachusetts Book Award.