The stretch of Route 16 that runs from Wellesley Square, past Blue Ginger, Saint Andrew’s Church, the Wellesley College Club and on into Natick, isn’t safe to cross even if you are a human experienced in such matters. Westbound commuters trying to get home to Dover and Sherborn aren’t keen on slowing down for pesky road crossers, while eastbound drivers trying to get into Wellesley Square to see if Yogurtology has finally opened (it hasn’t) aren’t exactly expecting sudden movement along that busy stretch of roadway.

If you’re a 2-year-old buck who doesn’t know much about the ways of the world, that area can be downright deadly, as my kids and I saw yesterday. The field across from the Hunnewell barn is beautiful, and the stretch of woods that separates the field from the Charles River gives deer the perfect habitat for browsing in the field or getting a drink from the river and then darting to the safety of the trees. We see them at the edge of the field all the time. Unfortunately, sometimes they decide to go the other way, toward the road. 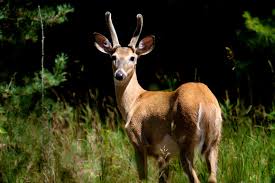 was down on the road, legs flailing wildly. Drivers were backed up in a long line all the way to Pond Road, not daring to pass the injured animal. It didn’t look good.

We pulled up alongside the driver and asked if he was OK. “The deer came out of nowhere,” he said, looking at his damaged car. Dialing 911, I told him the Wellesley police would be there soon.

That was his cue to depart, apparently, since by the time police arrived on the scene, the deer was still in the road, but the driver was long gone. The deer had to be euthanized via firearm due to catastrophic injuries, a part of this tableau we did not witness. According to Lt. Marie Cleary, when the police need to perform this unpleasant duty, they stop traffic in both directions to ensure the safety of the public, euthanize the deer, and then remove the deer from the roadway.

Lt. Cleary says that a handful of deer are struck by vehicles each year in town.  Some suffer catastrophic injuries which require that they be euthanized for public safety.  Others do not suffer such extensive injuries and go into the woods.

The Massachusetts Department of Fisheries and Wildlife estimates that there are more than 95,000 deer statewide and that there are about 80 deer per square mile in areas of eastern Massachusetts that, like Wellesley, are not generally open to hunting. Accidents like the one we saw yesterday seem unavoidable.

As far as individuals taking advantage of what sounds like excellent hunting success odds, Wellesley rules say that hunters must obtain written permission from the landowner or Town authorities in order to hunt. Good luck with that, since the forested land that is town-owned is closed to hunting, therefore written permission from Town authorities on that front would not be forthcoming. As far a private land goes, it would likely be impossible to get the required permission from all the homes within 500 feet to hunt it, as required.

For residents who thrill at the beauty of deer as they pass through yards, munching on the rhododendron, azealea, and sedum buffets thoughtfully planted just for them, the deer are just another suburban sight. For drivers they can seem more blight, a road hazard up there with speed traps and spring potholes. And the clueless deer find themselves in a dangerous plight as they glide along like Natalie Portman’s prima ballerina character in Black Swan, seemingly too beautiful and graceful to ever come to harm. We all know what happened there.