Earlier this year I picked up a slick MetroWest Massachusetts 2015 Winter/Spring Guide brochure at a local bank branch and was surprised to see the lack of Wellesley references in there (The Cottage, Wellesley College Davis Museum were among the few).

It got me thinking about whether Wellesley is even considered to be part of MetroWest, a geographical concept that my friends and colleagues who once worked for the Middlesex Daily News/MetroWest Daily News say was the creation of  a newspaper reporter back in the 1980s. 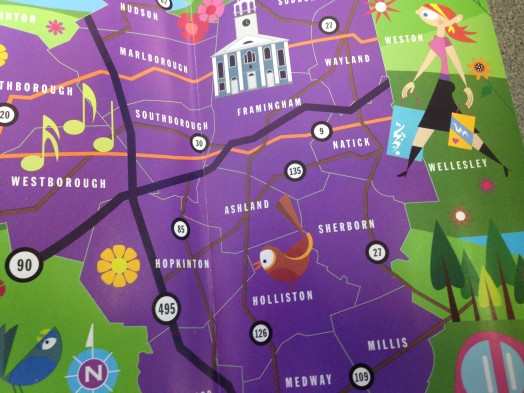 Susan Nicholl, executive director for the MetroWest Tourism Bureau, told me earlier this year: “When our nonprofit was launched 3 years ago, the state legislature designated our ‘MetroWest’ service area as 19 towns, which did not include Wellesley.  However, as we hear from more and more people from towns outside the 19 towns, our service area has unofficially expanded to about 30 towns, including Wellesley.”

In the bureau’s next guide, the map will be changed so that the original 19 towns are not a different color than the surrounding towns served, Nicholl says. Members of the bureau do get priority in terms of listings though. (FYI, the bureau is having its annual open house this Wednesday, Aug. 5, in Marlborough.)Some realtors lump Wellesley in with MetroWest, while others put Wellesley into Greater Boston and reserve the MetroWest designation for Framingham, Natick and other communities.  As one realtor put it: “Wellesley doesn’t consider itself anything but Wellesley.”
print