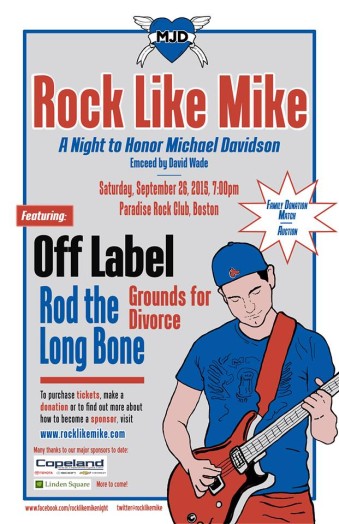 Michael Davidson’s musical family next month will unite at the Paradise Rock Club in Boston for a concert to raise funds for the wife and children that the Wellesley surgeon left behind after being killed at work at Brigham and Women’s Hospital in January.

Dr. Davidson, a multi-talented man who played in a band called Off Label with other local medical professionals, will be honored by that band as well as two others (Grounds for Divorce and Rod the Long Bone) at the Sept. 26 Rock Like Mike event, which will also include an auction to raise money for the Davidson Family Fund. Tickets cost $60 and the event is for ages 18+.