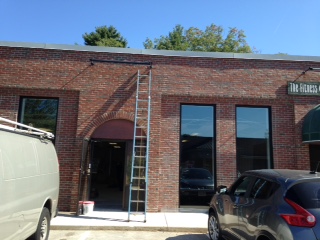 Wellesley will soon be home to a new music school, Bach to Rock, located in the corner space of the strip mall section of Linden Square, adjacent to the Kathy McCrohon Dance Center. For now, the only sounds coming out the space are the heavy metal sounds of power saws, hammers, and drills. But stay tuned for something more tuneful as franchise owner Don Kennel works to ready the spot for a late November/early December opening.

Bach to Rock’s hook is music lessons for students from early childhood through high school, as well as adults, in Top 40-type music, classical, hip-hop, blues, country, gospel, jazz, a cappella, bluegrass, electronica and more. Not only will students be able to get one-on-one instruction, the school also will help them put together bands that learn to play sets, record music in a studio, and perform in public.

Opening a franchise like this doesn’t run cheap, of course. Investor Don Kennel, owner of Syncopated Holdings LLC, has purchased the franchise rights to the Wellesley location, and others. According to the company’s website, Bach to Rock’s initial investment is $370,000 to $522,500. Bach to Rock says it envisions opening 500 schools across the nation over the next decade  and that prime territories are still available for development, in case you’re interested.

Bach to Rock boasts at least one famous instructor.  Matt McAndrew placed second on NBC’s 2014 season of “The Voice,” wowing audiences with his acoustic rock sound.

For now, the only acoustic sounds from that corner in Linden Square will be those of the tools of the construction trade. In time, however, the strains of sweet music, perhaps those of the recorder, or a rock and roll band, will replace all that. Still, music being what it is, the thump of heavy metal may not entirely leave when the construction crews go.

Listen hard for that time when the tune changes. The new sound will have the steady beat of one of the new bands rehearsing. That’s how you’ll know when Bach to Rock is open. (Also, keep checking back here. We’ll tell you.)