City Sports, the running shoe and athletic goods retailer that opened in Wellesley at 475 Washington St. in 2011, is about to shut its doors. That store won’t be alone either: The Wall Street Journal and others report that whole business is closing up shop. City Sports, which had filed for bankruptcy protection last month, will begin going-out-of-business sales on Friday that promise savings up to to 30%. 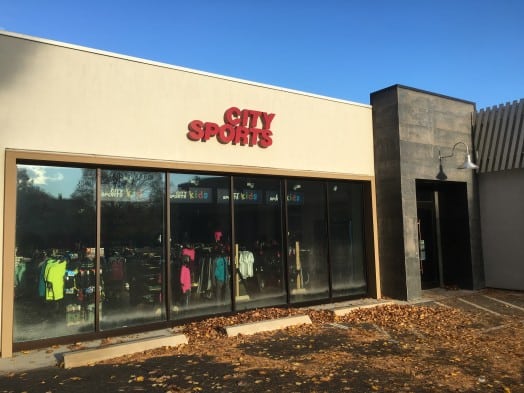 One Swellesley reader lamented the local store’s loss because “it’s the most convenient place to get GU [an energy-boosting gel popular with endurance athletes].” Another voiced a plea for a restaurant to take over the space.

The 10,000 sq. ft. business, which catered to adults who are into running, tennis, yoga and other such activities, replaced the old St. Moritz sports and ski shop. While City Sports initially didn’t really sell kids’ stuff, which seemed like a non-starter in Wellesley,    the retailer did carve out a kids’ section at some point during its run here.

City Sports has 18 stores up and down the east coast, and just opened one in September in Virginia. Locally, it faced competition from Marathon Sports down the road, as well as from big retailers such as Dick’s and Sports Authority on Rte. 9.

The 30-plus-year-old company’s website and social media accounts mention nothing about the closing as of now: Nothing to see here…(UPDATE: One of the companies buying City Sports’ assets issued a press release mid-day Thursday confirming the demise of the athletic goods retailer.)