The Wellesley Historical Society has had a busy fall sharing knowledge about various parts of town.

The latest activity took place on Halloween at the Village Church cemetery, where Society Executive Director Erica Dumont led a family-friendly program in which she dug up all sorts of good info on those in the old burying ground.

Earlier in October, the Society organized its first-ever trolley tour of eight historical homes, and spent time in two of the houses  — the Daniell-Ryan House at 4 Oakland St., and the Stanwood House at 323 Washington St., where refreshments were served at the end of the tour. 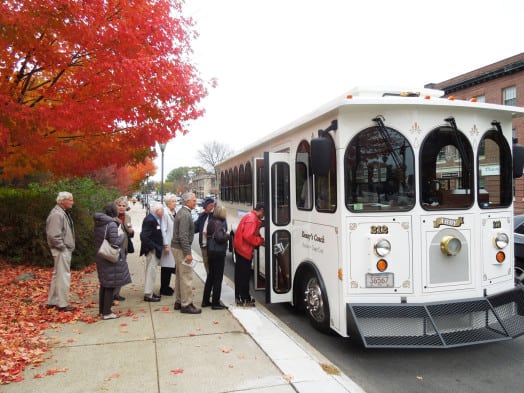 Tory DeFazio was the tour captain and he stopped the trolley on Weston Road so that everyone on board could wave to Anne Orser, a longtime Society member who was unable to be on the tour and who is related to the Hazeltons, one of Wellesley’s oldest families.

Stops on the tour, organized by Executive Director Dumont, included Katharine Lee Bates’s House on Curve Street, the home of renowned silversmith George Gebelein on Cliff Road, and the Daniell-Ryan house, which is thought to have been built in 1697 and was once the farmhouse for a 150-acre farm.

The tour was well received, with two trolleys full of participants, so another one is expected to be held next year.