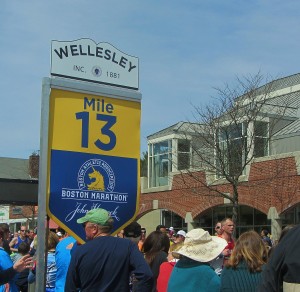 Remember Barbara Tatge, the Boston Marathon runner who planted a big smooch on a guy along the course in Wellesley that triggered a nationwide hunt for the man’s identity? Well, in that case, the guy was IDed, but it turned out he was married, much to the chagrin of Tatge’s daughter, who used the press and social media to spearhead the search.

Runner’s World magazine, however, didn’t forget about Tatge, and reports that she’s smitten with another fellow now who her daughter matched her up with. Apparently he’s not a runner, but they do enjoy practicing yoga and doing things outdoors together. Awww….