The 900 Worcester St. Committee has had its chance to start reviewing three responses to a request for proposals to develop recreational facilities at the former St. James the Great site, and now it’s the Wellesley public’s turn.

You can view each of the three proposals online now on a page tucked away on the Wellesley town website here.  The developers outline what sorts of facilities they would build, and address questions related to financing, parking, the environment and neighbors. As the Townsman has reported, the 900 Worcester St. Committee has begun its early evaluations and will hit the developers with more pressing questions in the weeks to come.

Beginning next week, you can attend a series of public meetings that will address each of the three proposals, plus neighbors’ concerns. All of the developers pledge to prioritize Wellesley residents’ and teams’ needs, and boast of experience in areas such as scheduling of space to optimize resources.

In a nutshell, here’s what the proposals include:

*Frost Realty Associates outlines a plan for two indoor NHL-size ice rinks and an outdoor lighted field suited for soccer, lacrosse, field hockey and football. Frost points to three other such forums that it has built over the past couple of decades. They’re looking for a 40-year, annual $100,000 lease from the town. 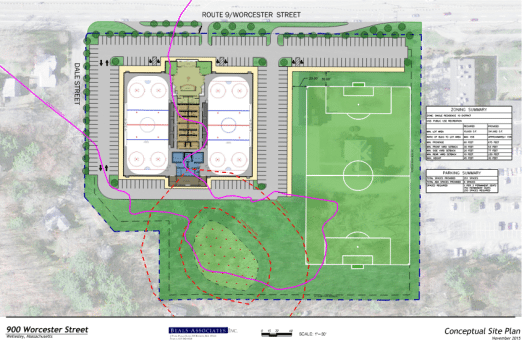 *Marathon Sports Group/West Suburban YMCA of Newton describe a facility including two full skating rinks, two pools (6- and 4-lane), plus an indoor field with turf as good as or better than that on the Sprague Fields. Marathon Sports Group points to relevant projects it has developed or is in the process of developing in Bedford, Middleton and Worcester.

All three proposals indicate facilities would open in 2018.

Here’s the schedule for public meetings: