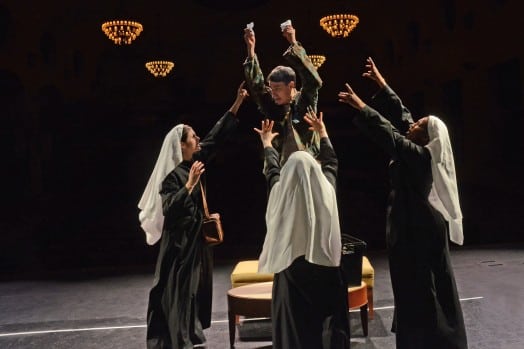 The House Of Blue Leaves

Artie Shaugnessy is a songwriter with visions of glory. Toiling by day as a zoo-keeper, he suffers in seedy lounges by night, plying his wares at piano bars in Queens, NY where he lives with his wife, Bananas (to the chagrin of Artie’s downstairs mistress, Bunny Flingus).   On the day the Pope is making his first visit to the city, Artie’s son Ronny goes AWOL.  Also arriving are Artie’s old school chum, Billy Einhorn, with starlet girlfriend in tow, who holds the key to Artie’s dreams of getting out of Queens.  The 1971 Drama Critics Circle winner for Best American Play, Variety assures that “Guare’s iconic play not only holds up, it still sets the bar for smart comic lunacy.”