The new year often brings a shift in Wellesley businesses coming or going or just moving and renovating, and 2016 has been no exception. Local businesses have been hard at work participating in the great communal task of Wellesley Square musical chairs for a host of reasons — because the coveted storefront over there has finally opened up and grabbing it is a now or never proposition, or because it’s time to give the whole place a facelift so that it can look refreshed, or because winter is long and boring, so why not?

Wellesley Toy Shop has officially bumped over a space and re-opened next door at the 59 Central St. space where Wellesley Gift Shop previously operated. The former Toy Shop location is empty for now and awaiting its new tenant, Cocobeet, a juice bar-plus that currently has a location at City Hall Plaza in Boston.

Meanwhile, across the street, 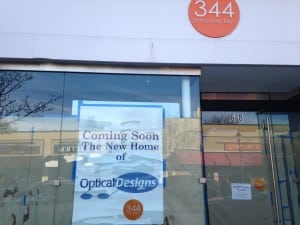 Optical Designs is moving from 72 Central St. into 68 Central St. which formerly went by 344, a women’s clothing store. More space to fill with fabulous designer eyeglass frames and to serve customers is the main motivation for the family-run business’s decision to hop over to the space after 6 years in its current spot. No word yet on what’s going in once Optical Designs vacates. 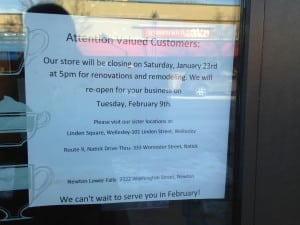 Stay strong for this one: the Wellesley Square Starbucks is temporarily closing on Saturday, January 23 at 5 pm for renovations as it expands into part of the old 344 space. Try not to fret, it will be a mere 17 days until Tuesday, February 9, when the baristas will be back to filling your prescriptions.

As for the truly incorrigible Starbucks addict, the Linden Square location at 190 Linden St. awaits.

Meanwhile, longevity through the ups and downs of every business cycle should not go unnoticed. As the longest-running tenant in Wellesley Square at 43 years, owner Steve Varriale of O’Neil Jewelers just keeps doing what he does, selling beautiful jewelry, watches, and more to a discerning clientele.