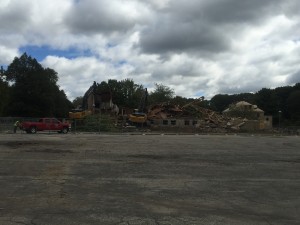 The 900 Worcester St. Committee received three strong proposals for the recreation complex to be built on the former St. James the Great property on Rte. 9 east, but each plan had enough shortcomings so that the committee has found itself looking for a re-do. But an expedited one at that.

The committee, whose volunteer members have been working on this project for several years now, intends to recommend to the Board of Selectmen on Feb. 8 that “we reissue the RFP at the end of March on a fast track for a May due date and aim to get to the BoS with a recommendation in early June.  This will give plenty of time to present at an anticipated fall Special Town Meeting.” The original RFP was issued over the summer.

A likely scenario is that all three proposals would be resubmitted, but with better explanations about funding, parking and other issues. A key consideration is that the town, which now owns the property, not be required to foot any of the bill for construction or facility maintenance.

One RFP respondent, Corbelis, actually did send a letter including additional details about its proposal to the committee shortly before it voted, but the letter was not considered as a matter of procedure. (Corbelis was hoping to get a last word in about parking/fundraising/community benefit given that the others vying for the project had their public interviews after Corbelis.)

If a new RFP process does take place, it’s possible that another outfit could enter the contest. Though some might like to see another round of interviews with the existing respondents take place instead.

The 900 Worcester St. Committee began early evaluations of request for proposal (RFP) submissions late last year and you can check out the proposals here, or view public presentations here that took place earlier this month. The committee has been looking at the proposals with an eye toward supporting the town’s needs for more playing spaces and facilities, but also ensuring that the neighboring area won’t be adversely affected.

To recap the proposals:

*Frost Realty Associates outlined a pool-less plan for two indoor NHL-size ice rinks and an outdoor lighted field suited for soccer, lacrosse, field hockey and football. Frost points to three other such forums that it has built over the past couple of decades. They’re looking for a 40-year, annual $100,000 lease from the town.

*Marathon Sports Group/West Suburban YMCA of Newton described a facility including two full skating rinks, two pools (6- and 4-lane), plus an indoor field with turf as good as or better than that on the Sprague Fields. Marathon Sports Group points to relevant projects it has developed or is in the process of developing in Bedford, Middleton and Worcester.

All three groups were shooting to open a facility in 2018.