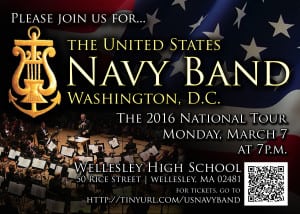 We just received official word that the March 7 U.S. Navy Band concert will be held in the Wellesley High School Gymnasium, which means organizers now have 800 more tickets available. So if you’ve been on the wait list, hooray, you’re in!

If you were too dejected to even try for tickets, reasoning that it would be easier for a high school senior to get off the Harvard waitlist than for you to score Navy Band tix, now’s your chance to prove everybody wrong and get into that prestigious concert.

The Navy Band is our nation’s premier wind ensemble, performing at presidential inaugurations, state ceremonies, and in Wellesley. The event is free, but seating is limited, so click here to reserve your tickets now.

You could also consider volunteering at or before the concert.