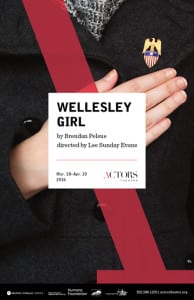 A new play called “Wellesley Girl” by Yale graduate student Brendan Pelsue has made its debut this month at the 40th Humana Festival in New American Plays.

In the embedded video below, Pelsue discusses with Courier-Journal arts reporter Elizabeth Kramer the origins and premise of the play, which is a dystopian and political tale set in New England hundreds of years from now but with connections to very current happenings. In fact, the play takes place in Weston, according to a review in the Courier-Journal that finds the play confusing at times, though credits the playwright with a stronger second half than first half. The reviewer enjoyed the performances, especially by an actor playing a robot.

As Kramer explains, there actually is a “Wellesley Girl” in the play. She writes:

“There’s also a proposal to leave the town and scorch the land to escape the mysterious group. But this rouses fear of contaminated water for Marie (Kelly McAndrew). She grew up in the nearby town of Wellesley only to go beyond that city with her family to see them and others drink the water and die from it.”

“In private, Marie (Kelly McAndrew), who survived an earlier politically driven environmental nightmare in what used to be the town of Wellesley, lobbies her ambivalent husband Max (Pun Bandhu) to take a stand and join her in fighting for the solution she thinks will save their children.”

A review on Arts-Louisville.com gives the play a big thumbs up, appreciating Wellesley Girl’s connection with the current state of affairs in the United States (“the play’s reflection of concepts of border control, limited natural resources, and polarization on every issue”).

Another review, on the website Insider Louisville, wasn’t especially flattering, though the reviewer acknowledges that others leaving the theatre seemed to have a more positive reaction (a couple of comments on Twitter were positive, one called the performance “heavy” — in a good way). This reviewer did seem puzzled about the name of the play:

“Why is this play called “Wellesley Girl” in the first place? In New England, that’s code for “pearls and cardigan-wearing white upper class preppy girl.” What does that have to do with anything? (Hillary Clinton is a “Wellesley Girl,” by the way.)”