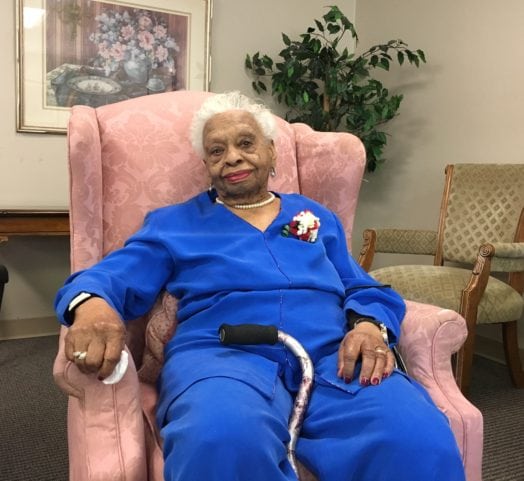 Meet Herlda Senhouse. At 105 years of age, she is Wellesley’s oldest resident, and earlier this week she had possession of  The Boston Cane to prove it.

As history has it, according to The Boston Cane Information Center:

On August 2, 1909,  Mr. Edwin A. Grozier, Publisher of the Boston Post, a newspaper, forwarded to the Board of Selectmen in 700 towns (no cities included) in New England a gold-headed ebony cane with the request that it be presented with the compliments of the Boston Post to the oldest male citizen of the town, to be used by him as long as he lives (or moves from the town), and at his death handed down to the next oldest citizen of the town.  The cane would belong to the town and not the man who received it.

The canes were all made by J.F. Fradley and Co., a New York manufacturer, from ebony shipped in seven-foot lengths from the Congo in Africa.  They were cut to cane lengths, seasoned for six months, turned on lathes to the right thickness, coated and polished.  They had a 14-carat gold head two inches long, decorated by hand, and a ferruled tip.  The head was engraved with the inscription, — Presented by the Boston Post to the oldest citizen of (name of town)  — “To Be Transmitted”. The Board of Selectmen were to be the trustees of the cane and keep it always in the the hands of the oldest citizen.  Apparently no Connecticut or Vermont towns were included (at one point it was thought that two towns in Vermont had canes, but this turned out to be a bit of a myth).

In 1924, Mr. Grozier died, and the Boston Post was taken over by his son, Richard, who failed to continue his father’s success and eventually died in a mental hospital.  At one time the Boston Post was considered the nation’s leading standard-sized newspaper in circulation.  Competition from other newspapers, radio and television contributed to the Post’s decline, and it went out of business in 1957.

The custom of the Boston Post Cane took hold in those towns lucky enough to have canes. As years went by some of the canes were lost, stolen, taken out of town and not returned to the Selectmen or destroyed by accident.

In 1930, after considerable controversy, eligibility for the cane was opened to women as well.

Mrs. Senhouse, who has called Wellesley home for 37 years and is a resident of Glen Grove, where the ceremony took place, was allowed to hold onto Wellesley’s Boston Cane for a minute or two before white-gloved Wellesley Historical Society representatives, familiar with tales of less-careful towns losing track of their cane, spirited it away for safekeeping. The 31st Wellesley recipient of the cane was instead gifted with a pin to commemorate the event, and was showered with roses, the camera clicks of the papparazi, and the attention of 30 well-wishers. Looking fabulous in a Persian blue pantsuit, pearls, freshly coiffed hair, and lipstick brightening up her features, there she sat in a wing-backed chair, receiving her admirers.

She cited wars and the current political climate as two of the most amazing things she’s lived through. “This is the most stupid campaign I’ve seen in my life,” she said. Her tips for living a long and healthy life: “Don’t get stressed out, and if you can’t fix it, forget it.”

The Woburn High School graduate and her late husband, William, never had children of their own during their 62-year marriage, however Mrs. Senhouse worked as a nanny, raising six children for three families during her career. Her spiritual life is taken care of by her church home at Myrtle Baptist Church in West Newton, and she takes care of her daily needs of this earth at Glen Grove.

“Herlda, I hope you life to be 120,” declared a well-wisher to unanimous agreement.

Hear, hear. The Boston Cane is historical, and well-crafted, and important and all, but the fewer times it changes hands, the better everyone likes it.