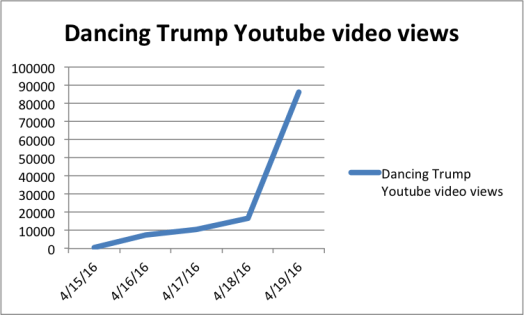 Not since Wellesley High School English teacher David McCullough’s “You’re Not Special” commencement address went global back in 2012 (2.6M Youtube views) and the Wellesley Fire Department’s dog saving heroics hit the big time with an Ellen Show appearance in 2013-2014 (135K Youtube views), have we seen a video out of Wellesley go as viral as the Dancing Trumps of Fiske Elementary School. (The chart above is our rough estimate, based on checking the views each of the past 5 days.)

The decision by Fiske and Wellesley Public Schools to put the kibosh on a couple of silly and entertaining talent show skits featuring Donald Trump characters has deservedly been met with widespread jeers and mockery — and of course, lots of Youtube views and comments (up to 135 as of Tuesday afternoon). There have been over-the-top calls for the Superintendent’s head and to out the parent who initially complained, and some are encouraging talk show hosts like Jimmy Fallon to get the kids on their programs. The school’s effort to de-politicize its activity has naturally wound up doing just the opposite, giving bloggers something fresh to opine about in the name of first amendment rights and more.

The video posted by one of the kids’ moms on Wednesday, April 13, had about 50 views when I first saw it early Friday night (how we didn’t find out about it earlier is another matter, Swellesley Nation!). By the end of that night it had a few hundred views, fueled by the initial report in the Boston Globe and follow-on reports here, in the Townsman and on local news stations, including Fox News.

Associated Press picked up on the story Friday night as well, and as the newswire’s story got disseminated by news outlets around the country — from New Jersey to Connecticut to San Francisco — the Youtube views rose to 7,500 by Saturday night and crossed the 10K threshold by Sunday morning.

A lot of views, yes, but not really what I’d call viral. We’re not talking MRSA here.

The school system might have been catching something of a break with many families taking off for school vacation week and putting Wellesley schools out of their minds. But with the Boston Marathon taking place Monday, and perhaps many people searching on the term “Wellesley,” it’s likely that Dancing Trump stories popped up in Google search results alongside Wellesley Scream Tunnel ones.

But then the hits kept coming. Bloggers on sites such Reason (April 16) and Hot Air (April 18) and Legal Insurrection (April 19) caught up on the story. The video was also getting its fair share of shares on Facebook (almost 1,000) and Twitter (about 100…that seems low), according to social media tracker Buzzsumo.

Video views had risen to 16.5K on Monday afternoon, and then jumped to more than 85K by Tuesday at noon (Google was listing about 50 stories at that time, a number of them duplicates of the AP story). It appears as though the story’s appearance on a bunch of Yahoo! sites might have had a big hand in that.

Hey, there’s a lot of Donald Trump news out there and it’s taken some of the media outlets a while to notice this story.

We’ll be tracking the continued spread of this story, and WPS should too. Administrators and staff have got themselves quite a case study in modern media to share with the kids when they return from April break.