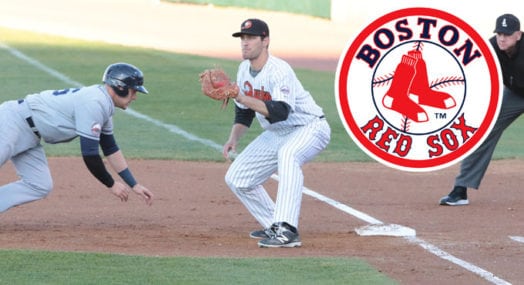 As we reported last week, it’s been a wild spring for Freiman, who had recently signed to play with the Atlantic League’s Long Island Ducks after a series of trades and releases by big league and minor league ball clubs. Freiman swung through Wellesley recently to work with the Wellesley High Raiders baseball team, showing he hasn’t forgotten his roots.

Freiman played with the Oakland A’s in 2013-14 and did play in Fenway during that period. He also beat Mariano Rivera and the Yankees with an 18th-inning single in one game.

The Ducks said Freiman’s contract was purchased by the Sox and that the 6-foot-eight-inch righty will report to the Double A Portland Sea Dogs.

The 29-year-old Freiman played in six games with the Ducks, compiling a .381 batting average with two home runs, four RBI, five runs scored and one double.

So watch out Hanley…