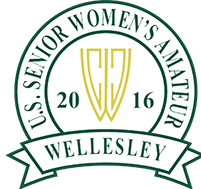 Volunteers are being sought to help with the U.S. Senior Women’s Amateur Championship being at Wellesley Country Club in September, and those who do will have not only an opportunity to get up close to some of the best golfers in the country but will be rewarded with an opportunity to play the course for free in October.

This championship will be held September 17-22, with official practice rounds on September 15-16. For non-members who volunteer for three shifts or more, the club will reward your participation with a Volunteer Appreciation round of golf, which will be held on October 3.

In addition, volunteers will receive breakfast or lunch during their shifts.  Volunteers will  purchase an official championship shirt and hat for $35 that they will wear while working.  Even if you’ve never worked at a golf tournament before, don’t worry, training and orientation will be provided prior to the championship.

Sign up now at www.wellesleycc.com to make sure you get the best shifts. The initial volunteer sign-up deadline is June 15.