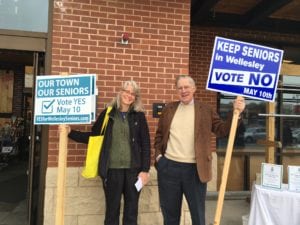 Wellesley voters approved about $5.5 million in borrowing for a standalone senior center on Washington Street, a project that got its start with a resident’s $825K gift to the town back in 2005. Results are 2,217 yes votes (56%) and 1,722 no votes, with 25% of registered voters going to the polls.

Precinct C, which includes the Upham Elementary School and Cliff Estates areas, was the only precinct not to vote in favor of the senior center.

Arguments have been made over the years about whether a standalone facility was really needed, and if the 494-496 Washington St. space where it will be built would create traffic problems and other issues for neighbors. But Town Meeting members gave the project a thumbs up in April, setting the stage for today’s special election on what overall will be about a $9M project.

During this brief campaign season, proponents argued that seniors deserved a dedicated facility, while opponents countered that a rise in taxes as a result of the project would actually force seniors to leave town.

Unofficial but good news: The "YES campaign" has it — 2217 to 1717! Congratulations to our community and especially to our seniors.

The ballot question posed to voters on Tuesday was:

“Shall the Town of Wellesley be allowed to exempt from the provisions of Proposition two and one-half, so called, the amounts required to pay for the bonds issued in order to fund the plans and specifications, construction, equipping and furnishing of the Tolles Parsons Center building at 494-496 Washington Street?”