Dunkin’ Donuts on Rte. 9 East in Wellesley has new neighbors and is getting additional ones soon. The Wound and Hyperbaric Treatment Center is already operational, and setting up shop is Boston Vein Care as well as a couple of Newton-Wellesley Hospital operations.

That’s what all that construction has been about in the location that a few years back was home to Justine’s Grill. 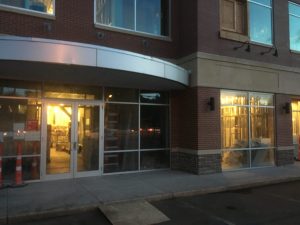 Dr. Ikram Farooqi, a Newton-Wellesley Hospital-affiliated physician who has been doing wound care in the area for more than 12 years, says his operation started out in Waltham in 2004 as one of the first such clinics around here. The business moved to Walnut Street in Wellesley back in 2007 and now has moved to 978 Worcester St. “because we needed larger space for the chamber,” Dr. Farooqi says.

“The facility is mainly for treating and healing all types of non-healing ulcers,” Dr. Farooqi says. “Hyperbaric oxygen treatment is also used for certain wounds which are not healing and helps to save limbs/amputations.”

UPDATE (10/19/16): Here’s a video about the hyperbaric facility posted on Wellesley Public Media: