Let’s go back a bit in Wellesley’s history, back to our town’s beginnings, to the late 1700s/early 1800s, when Wellesley was known as West Needham. It was a time when the here and now was of less import to our staid forbearers than the rewards of the next world (or torments, depending on one’s earthly behavior). It was a time before anyone with a WordPress blog and few pesky daily survival challenges could write down their musings and disseminate them to those who might give a care or two.

Yes, this was a difficult period in our town’s history, this brief era with no Swellesley Report. Still, the area’s earliest residents, now at eternal rest at Wellesley’s Woodlawn Cemetery on Brook St., could not be silenced, even in death. They may not have had the means, as I do, to tap away on their laptops, posting on a daily basis, but they posted nonetheless. Their medium: stone. Their words: as concise as a Twitter post.

I give you The Swellesley Report’s precursors, our role models, our historical heroes. They were a little sassy, a bit cheeky, and we remember and salute them for this. Their tombstones were their last and probably only chance to get published, and they did not throw it away. They had a clear message. The sayings on each tombstone remind the living that their times are all too nigh, and not to dance with abandon on the graves of the departed. Because as Mr. Enoch soberly states, “The end of all things is at hand.”

As I was putting together this post, a few spooky facts came to light. I noticed that the grave stones I referenced above were all clustered together on a hill and were the only ones in the cemetery I found with messages to the living, and that they were the oldest graves in the cemetery. As it turns out, the souls at rest here were travelers, in a manner of speaking. According to Village Church Historian Brad Harding, they were originally interred at the Wellesley Congregational Church on College St., but in the 1950s a group of 20 – 25 (records are unclear on the exact number) was disinterred to make way for a Village Church addition. The church moved them to Woodlawn Cemetery, where they have, one hopes, found their final resting place. The hill they now call home doesn’t have an official name, but I’ll now always think of it as Village Church Hill. 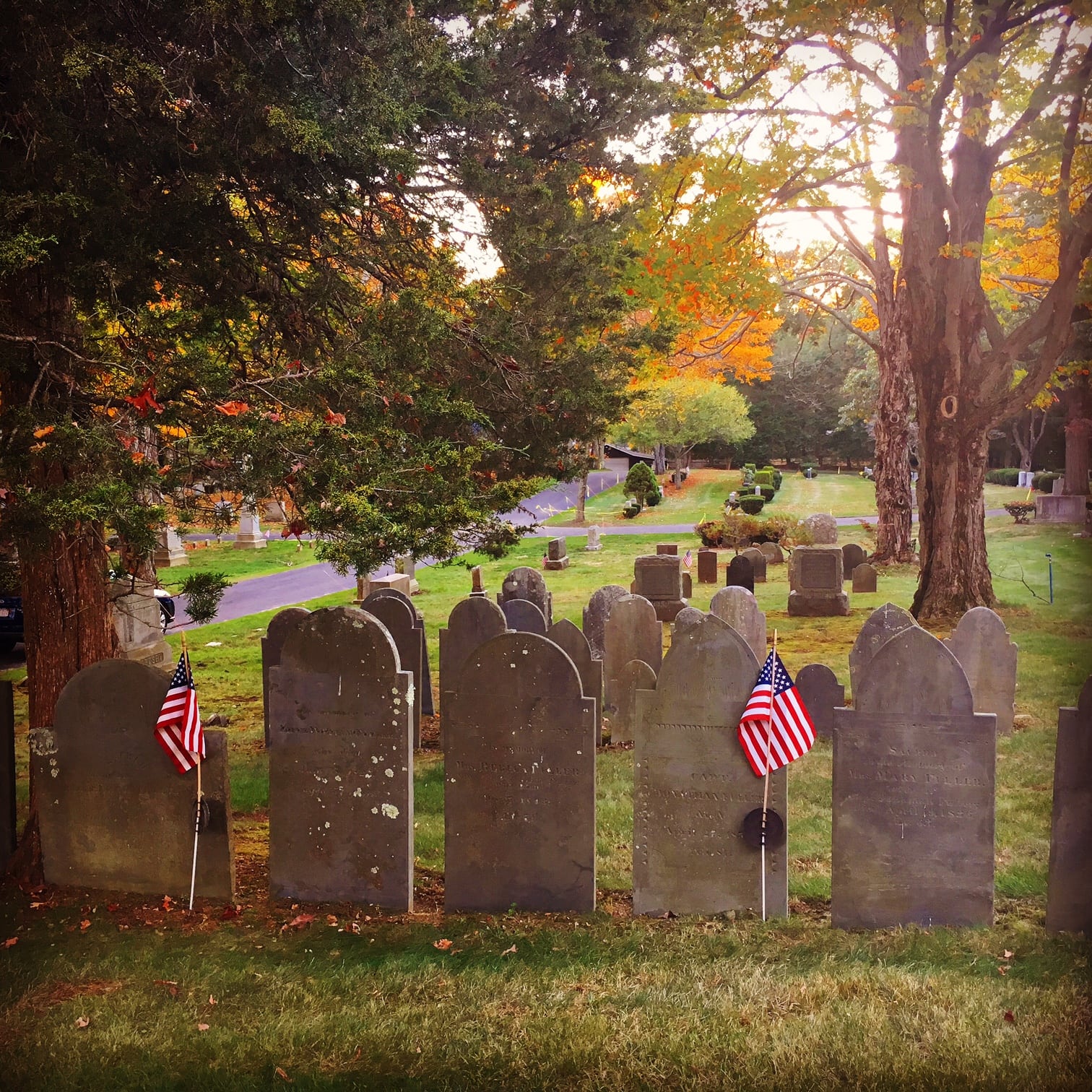 Even spookier, in 2002, the most recent Village Church renovation was underway. Long-time church member Kirk Smith says that the driveway itself had been removed and new excavation was done to allow a new foundation for the building. An overnight July thunderstorm washed away even more of the edge of the cemetery, laying bare the remains of one whose grave was, in fact, unmarked. Next morning, when the crews came to work, they were upset and bothered enough to be willing to work only on the other side of the site.

Smith noted that the unearthing of human remains starts a lengthy process. The Wellesley Health department was contacted, local and state police had to determine that the site was not a crime scene, and the State Archeologist was required to determine that the remains were not those of a Native American. All this took more than two years, and the whole story came to a conclusion with a reinterment service conducted by Rev. Dan Wooten, one of the pastoral residents at the time. The identity of the person was never discovered. Forensic study was able only to establish that the bones were those of a “gracile female”; in other words, a slender, probably older woman, who now has a proper, final place of quiet rest.