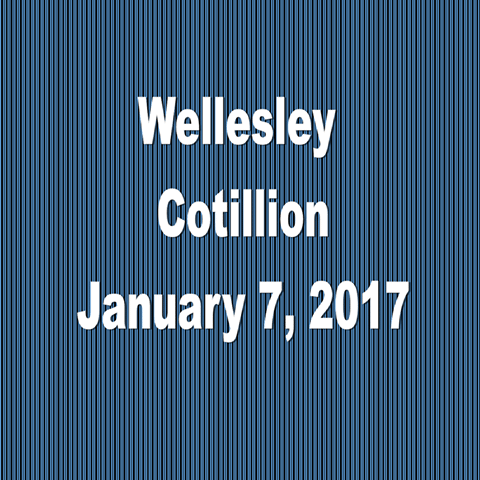 The Wellesley Cotillion, a parent-sponsored tradition since the 1940s, has set January 7 as the date for the formal dance to which all Wellesley public and private school juniors and seniors are invited. The location is under wraps for now, but co-chairs Camilla Boyce and Amanda Zarle, a couple of can-do parents with the skills of an army general ready to muster the troops if ever there were two, promise to release details as they become available.

The event, typically attended by around 800, is so eagerly anticipated and considered such an integral part of students’ high school experience, that sports teams have even been known to reschedule games so that their players can attend the big dance.

Typically the invitations, enclosed in creamy envelopes, are sent out in mid-November and arrive in mailboxes via United States Postal Service. Inside, a heavy card stock invitation written in curvy script (who can even read script these days? But that’s part of the formality and charm of it all, of course) reveals the particulars of the evening such as time, date, and place, and a pre-stamped RSVP envelope is typically included. Since the event has traditionally been run entirely on donations, a suggestion for a donation, which has been in the $75 – $85 range over the past several years, is also part of the invite. Last year, however, the tickets were referred to as a “cost” and the committee offered financial assistance for those who needed it.

Last year, tickets to Cotillion included mandatory round-trip luxury bus service from Wellesley High School to the event, which is not affiliated in any way with the Wellesley Public Schools. Also new last year: tickets had to be purchased on-line. Some previous Cotill locations have been: the Cyclorama at the Boston Center for the Arts, the Westin Boston Waterfront Hotel, the Back Bay Events Center in Copley Square, and the Dorothy Quincy Suite in the Back Bay. Whether Cotillion will repeat at one of these locations is anyone’s guess.

There are a few things we don’t have to guess at: There will be dramatic “Cotillion asks” staged all over town, and there will be much sartorial fretting. The seniors will claim that Cotillion is so overrated, the juniors will ignore them and enjoy the excitement of it all.

Then, on the big night, they dance.