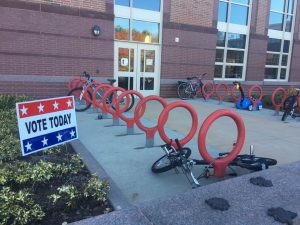 While Donald Trump won the big prize on Election Day, unofficial results from Wellesley show Hillary Clinton easily beating Trump among local voters in the U.S. Presidential Election, with 86% of registered voters doing their civic duty. Clinton/Kaine nabbed about 69% of the Wellesley vote, with Trump/Pence settling for 22%. (Obama beat Romney 56% to 42% in Wellesley back in 2012, when 91% of voters went to the polls.)

Clinton beat Trump in every Wellesley precinct, including precinct C, which went with Romney four years ago.

About 300 hand-counted ballots and 180 paper ballots filed by citizens abroad are not included in the above results, according to Town Clerk Kathy Nagle. About half of registered voters in Wellesley (including the town’s oldest registered voter) went to the polls early.

As for Clinton’s alma mater, an overconfident Wellesley College threw a big watch party and hung banners across campus, but Trump’s victory was a major party pooper for many on campus.

A couple of obnoxious Babson students reportedly drove around the Wellesley College campus the next day to rub the election results in and were asked to leave the campus. A public Facebook post about the incident has been shared more than 3,600 times.

On the ballot questions, Wellesley voted No on 1 (slots), Yes on 2 (charter schools), Yes on 3 (farm animals) and No on 4 (pot). Results for questions 2 and 4 were relatively close.