“Secretary Clinton’s decision to come to Wellesley is profoundly inspiring to all of us at the College. As Wellesley students, we arrive here believing in a future that respects women’s potential and accomplishment, but as graduating seniors, and at this moment in history, we look to Secretary Clinton, our sister, as someone who will inspire us to make that future now,” said Casey Butler ’17, co-president of the senior class. Amal Cheema ’17, also co-president, added, “She is the best person to represent who we have become at Wellesley and who we strive to be in the world. Her tireless push for progress embodies the spirit—and the courage—we seek in breaking down barriers and shattering glass ceilings of all kinds.”

“Secretary Clinton has changed the face of American politics, showing the country and the world that there must be no limit to the heights to which women can rise,” said Wellesley College President Paula A. Johnson. “She joins a long line of women history-makers, including fellow Wellesley alumnae, who give us all a profound sense of hope that the future is ours to define. A true force of nature, Clinton inspires women of all ages to find their voice, to defy expectations, to reject stereotypes—to match their competence with confidence in pursuing tangible, positive change in the world. Her persistence, her love of service, and her commitment to fight for women and girls serves as a living example of how to make ‘what appears to be impossible, possible,’ as she said to her fellow graduating classmates at Wellesley in 1969. For these reasons and many more, Wellesley is immensely honored to welcome her home as this year’s commencement speaker.”

From First Lady, to U.S. Senator, to Secretary of State, Clinton’s years of service to the country have made her one of the most prominent political leaders of our time. Clinton’s historic run for the White House in 2016 brought women’s leadership, women’s rights, the gender pay gap, and other issues central to gender equality into the global spotlight like never before. Her longtime and outspoken support for women’s rights—she famously said “women’s rights are human rights”—earned her the admiration of women and girls across the world.

Clinton has kept strong ties to the College that had a powerful influence on her political worldview—classmates have described her as a consensus builder, a listener, and a true leader at a tumultuous time. She has also remained close to her friends from Wellesley, many of whom have supported her political aspirations since she ran for student government president. This is not the first time Clinton has been asked to deliver a commencement address at her alma mater. In 1992, she gave the address as the United States’ First Lady. And in 1969, she was the College’s first-ever student commencement speaker.

The story of Clinton’s rise to some of the highest positions in government is often linked to her Wellesley years and how the College cultivated her approach to leadership, which placed the greatest emphasis not on power but on participation and helping others. Clinton has said that Wellesley prepared her “to take on some of the rough-and-tumble” of a life in politics, and taught her “if you get knocked down, get back up.”

During the presidential campaign, her 1969 student commencement speech, which launched her into the national spotlight, became a touchstone for media narratives about Hillary Rodham’s political, ideological, and rhetorical formation. More recently, she has said of Wellesley, “It is a special place. It helps women discover our talents; it gives us the freedom to set our own paths; it shows women that when we work hard and stay true to our values, there’s no limit to what we can achieve.”

Clinton, who served as Secretary of State from 2009 -2013, Senator from New York from 2001 -2009, and First Lady of the United States from 1993 – 2001, is currently a private citizen who, after a grueling presidential campaign, has been spotted taking contemplative walks in the woods near her Chappaqua, New York home. Perhaps some of her ruminations will make it into her yet-to-be titled upcoming book.

Publishers Weekly has reported that Clinton has sold a new book of quotations and personal essays to Simon & Schuster. The book, which is expected to publish under the S&S trade imprint in fall 2017, will tell stories from Clinton’s life, including her experiences during the 2016 presidential election. It will also feature a collection of inspirational quotations.

“These are the words I live by,” Clinton said, according to a press release. “These quotes have helped me celebrate the good times, laugh at the absurd times, persevere during the hard times and deepen my appreciation of all life has to offer.” 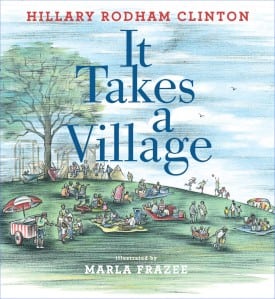 In addition,  Simon & Schuster will publish Clinton’s bestselling It Takes a Village for the first time as a picture book in fall 2017. The book will be illustrated by two-time Caldecott Honor winner Marla Frazee.