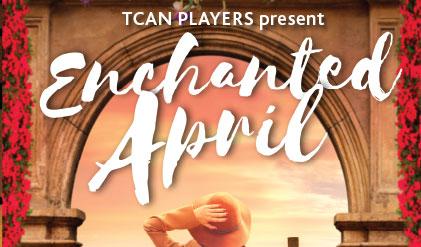 In Elizabeth von Armin’s 1922 novel-turned-play “Enchanted April”, a 2003 Tony-nominated Broadway production, the time is post-World War I; war widows are common, grievously wounded soldiers shaking tin cups for tuppence in the streets even more so. So what right do Lottie and Rose, ladies kept and cared for by intact husbands, have to yearn for a month of Italian Riviera sunshine, sans spouses?

And so it goes as the ladies, step by step, check off their boxes as they work toward making an experience happen that Lottie — with the gift of prescience she insists on sharing with all the characters whether they want it or not — knows will be transformational. In fact, as is ultimately acknowledged by husbands originally dead set against the whole idea, the sunshine and Italian castle rental turned out to be absolute needs, not luxuries.

What theater-goers need as we slog through our own winter is a few laughs, and this vibrant production now running at The Center for Arts in Natick (TCAN) delivers just that with flawless comedic timing and a dash of British farce thrown in.

The all-amateur cast of  Wellesley residents Olivia Rizzo, Cathy Merlo, and Director Kevin Groppe, along with Cindy Bell, Steve Burgess, Stacy Kernweis, Julien Lafleur, Bill Novakowski, and Marianne Phinney put together a thoroughly enjoyable performance that keeps the laughs going, mostly intentionally but sometimes not, as when the vase of flowers got knocked over for the third time (ah, Opening Night mishaps). I admit it, I was praying for the flowers to go down a fourth time, just to keep the fun of the found gag running.

No time for such nonsense, though. There’s so much that Lottie and Rose have to do before they can make it to Italy. The budget needs winnowing, and so the ladies place an ad for two more ladies to join them and thus reduce expenses. Their newspaper query promising Italy and sunshine and a castle and wisteria has a sort of 1970s personal ad tone to it (“If you like pina coladas…”), and it works, as such promises often do. They shake off the objections of their husbands, come to terms with the Italian-castle landlord, and after a harrowing train ride through weather as wicked as the pious Rose feels for making such an escape, they make it to the Italian Mediterranean and the beautiful castle.

A new day dawns, and the very theater sets, created true to the idea of an English winter vs. an Italian spring by set designer Gail Weston-Roberts, shake off the English heaviness of dark paneling, winter coats hung on a coat tree, and tables covered with brocade. In Act Two, all things dowdy are left behind, and the stage is transformed into a light and bright villa with a picture-perfect view of the sea, and the promised wisteria blooming in profusion. And just like that, the characters, the sets, and the audience have been birthed into the beauty of castle San Salvatore.

As we get to know the four women, and get comfortable ourselves with Italy-in-April-time, it becomes more apparent that comedy can be brought forth from what starts out as a deeply unhappy group, there to philander with Italy and cheat on their everyday lives. Lady Caroline, a beautiful and eligible socialite, is there to take a break from the constant thrust of society’s expectations (and those of a more urgent nature). Unsurprisingly, she confides, “I find my self in great need of an escape.” Wellesley resident Olivia Rizzo plays Lady Caroline with a bit more fast-talking brassiness than might be expected from a titled British lady. Still, Rizzo makes it work by allowing the entitlement of Caroline’s born nobility to seep into every line and movement. Rizzo’s Caroline can bat eyelashes like nobody’s business, and when she so much as raises an eyebrow, you want to fetch a cold drink for her, or light her cigarette, or do whatever her ladyship so pleases.

Costanza, the fiery Italian housekeeper, is on that job. Played with great emotion and humor by Wellesley resident and Babson College employee Cathy Merlo, Costanza gets that rich young things like Lady Caroline naturally need good-natured (paid) souls like herself to cater to their whims. Costanza plays favorites with the four ladies, and Lady Caroline is the clear winner in her eyes. There is a fair amount of Italian spoken in the play, and Merlo’s fluency is a great strength. From her accent to her gestures, she reminds the audience of where we’ve been taken. No, we are not in a English drawing room simply transplanted into an Italian castle. We are actually in Italy, and due to that fact, the tea may not be quite up to snuff, but the wisteria is blooming and the sea is shimmering, so get over it already.

Director Kevin Groppe, another Wellesley resident, is making his directorial debut with the TCAN Players. Groppe recently retired from Dana Hall School in Wellesley where he was head of the performing arts department for 33 years. He runs a tight ship on stage, particularly with the complicated and well-choreographed split-screen scene when Rose and her husband appeared on one side of the stage, and Lottie and her husband on the other, having parallel arguments about the same topic (Italy, of course). You’ve seen the TV equivalent of such a scene, but in live theater there is no take two. The actors had to have their timing down cold, and they did.

Mrs. Graves, acted by Marianne Phinney with her entire body, starts out claiming that she just wants to sit in the shade and remember better times and better men, but ends up desperately fighting off feelings of rest, renewal, and sheer happiness. Mrs. Graves sets her jaw, she rolls her eyes, she presses her lips into a firm line, all while maintaining ramrod posture and claiming to understand only Dante’s Italian. Sounds like hell. But then, somewhere along the line the old battle axe loses the fight to remain so as the place gets hold of her, reasoning, “Isn’t it better to feel young somewhere than old everywhere?”

As Lottie and Rose feel San Salvatore’s spirit-healing ways taking hold of them, they find it easy to shrug off all of the small-mindedness to which they clinged in London. That gone, they begin to long for their husbands, who answer the sirens’ call. Mellersh (played with swagger and bluster by Bill Novakowski) and Frederick (played, somehow, with smarminess and sensitivity, by Steve Burgess) are both true romantics despite their flaws, and both were hurt to have been left behind by their wives. And since it never hurts to have an extra man about the place, Julien Lafleur’s Antony, owner of the castle, rounds things out as a fast-talking, bear-hugging, rather exuberant Englishman. Must be the excitement of the sea air. Or Lady Caroline.

Gradually, San Salvatore turns into a house party where everybody lightens up, the unhappy women shed the heaviness of their mood as eagerly as they do their winter clothes, and trade in mournful sighs for giggles, and ruminations about the past for faith in Lotty’s predictions about a beautiful and life-affirming future for all.

All in all, a fun production where amazing grace happens. And TCAN is less than three miles down the road from Wellesley Square, so why not cross the border and enjoy?